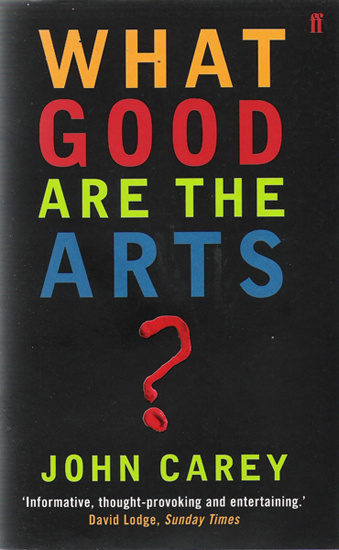 Review of Chapter 1 in What Good are the Arts? by John Carey.  Transpositions is hosting reviews of each chapter of this book from 28 March – 3 April 2011.

As would any philosopher who seeks to address matters of public debate and discussion, John Carey sets out to identify and critique instances of poor reasoning and lack of logic in argumentation. It is exactly these things that he finds throughout the history of serious discussions about the arts. For him, the whole matter has been a “farrago of superstition and unsubstantiated assertion” (11), convictions that are “largely unexamined” (xii) about a “difficult thing to measure” (xiii). Worse still, the history of the philosophical aesthetics as he sees it is infected with religious assumptions. God and spirituality has been for him too easily invoked as a foundation for views about the arts and the affect of the arts upon people and all of this, in Carey’s view, advanced by way of logical inconsistency and unproven assertion.

In the first chapter entitled “What is a work of art?” Carey announces his own “secular viewpoint” (3) and proceeds to take the reader through a tour of main themes and personalities dominating the Western philosophical debate about the arts beginning in the 18th century, justified on the basis that it was only then that the very question about the status of art would have been intelligible.

Two criticisms seem to inform Carey’s project throughout. One is a perceived elitism that characterizes definitions of art in the modern Western tradition. Only those with the right frame of mind can recognize, understand and properly appreciate art. Carey finds this unacceptable. The second is against essentialism in the definitions of art that Carey reviews. Anti-essentialism seems to be one of Carey’s own metaphysical commitments. In one of his own unsubstantiated assertions, Carey states as self-evident that “Meanings are not inherent in objects. They are supplied by those who interpret them” (20), citing the authority of recent literary theory as sufficient justification for his view.

Carey’s interrogation of philosophical aesthetics concludes with a consideration of Arthur Danto’s contribution and the current state of the professional “art world,” because the pronouncements of the “art world” play a large part in Danto’s scheme of securing a stable definition of a work of art. It also provides fuel for Carey’s ridicule.

Towards the end of the chapter Carey unveils his own definition:

This definition for Carey avoids the elitism and essentialism that he finds and rejects in previous analyses. Its rather facile character underlines the basic skepticism that Carey’s text insinuates towards claims for anything that for him fail a test of complete public accessibility and accountability. Carey’s secularism is presented in a morally neutral and socially democratic light, a position which seems to lay at the heart of his project but which is, of course, a faith commitment nonetheless.

In spite of its sarcasm, skepticism and philosophical fallacies of its own, Carey’s text can serve to highlight weaknesses in former philosophical and theological aesthetics, and encourage theorists and theologians of the arts to seek maximal clarity, criterion, and means of assessment in their thinking and writing about the arts. The “aesthetic turn” taking place in theological and Biblical studies deserves rigorous analysis and articulation, and if nothing else, Carey’s text can help show us what to avoid.

James McCullough is a PhD student at the University of St Andrews. His research explores the relationship between works of visual art and spiritual formation. He lives on a farm near St Andrews with his wife and four children.

Do not go gentle into that good night, Old age should burn and rave at close of day; Rage, rage against the dying of…