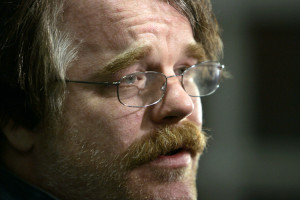 Shortly after hearing of the late Mr. Philip Seymour Hoffman’s death, my friends sent me texts: “I heard. I’m sorry.”

Strange. I must have talked about this man, a movie actor who I did not know and who I never met, enough for my friends to know news of his passing would hit me like a sock in the gut.

I’ve liked Mr. Hoffman from the first I saw of his work, been interested in the professional choices he’s made, and always found him compelling. It is the same attraction I feel to some people in my life—actors, writers, priests, teachers—when I watch them doing exactly what they’re meant to do. It’s a fierce intuition, and a blatantly pastoral one. I keep my eye on those people and long for them to thrive. I pray for them with ferocity and focus. Their tragedies I take personally.

But why their tragedies and not some Other?  Why this fierce intuition for celebrities?  Surely many others in need trump celebrity. Or do they?

Mr. Hoffman’s death has forced me to reconsider a more fundamental question: Are celebrities my neighbors?

Christians have been clueing in recently about the need for increased charitable attention toward those who make and perform in our movies. Among many other ministries, several groups exist who simply spend years praying through lists of Hollywood celebrities. And why would this desire to do such a wacky thing find its manifestation in the Christian Church?

I think it’s entirely proper that it does. And Julian of Norwich may give a clue toward why.

In one of her many visions, St Julian comes to understand the economy of the Trinity as differentiated gestures of love toward humankind, each gesture specific to one person of the Godhead in a special way. The Father gives nature, the Spirit brings nature to its fulfillment in grace, and between nature and grace she sees a third property: mercy, which belongs to Christ who, she does not let us forget, shares human “sensualitie.” The one who is the especial keeper of mercy—the doorway of  nature’s growth unto grace—is the one whose body bears and keeps in the life of God the entire performance of the human story.

It is this in-between place, mercy, the especial gift of Christ to give, that the Church is born and that the Church receives not only her vocation, but the vocation of every human person. As Christ’s body, the Church herself is performative and represents all of humanity to God.

Is there something, then, about the vocation of mercy, of creative performance of the whole human drama, and of a should-be especial sensitivity to bodies, to the very fleshiness every person now shares with the Lord—which should give the Church an extra nudge of neighborly mercy toward those whose vocation is performance, whose bodies are vulnerable to innumerable eyes?

Experiencing the work, and recognizing the lives, of artists in Hollywood through the framework of the Church and her calling to mercy—that’s a beginning to treating Hollywood stars as neighbors. Mercy looks with unflinching wisdom—another property Julian attributes especially to Christ—but also knows when to lift an oppressive gaze. Christians might look at Hollywood rightly expecting to find the Trinity’s gifts and gestures toward humankind, just as Christians would attempt to do in any context. The Church would carry into the movies, and into their viewing of the bodies of those people who star in them, a consciousness of Jesus’ flesh-wrought mercy which engages, enacts, and proves grace and nature’s proper belonging to one another, and so makes their seeming alienations all the more unbearable to feel.

Are celebrities my neighbors?

Who isn’t?  And Hollywood is rough. From what I hear, anyone there could use a prayer on their behalf. Maybe fame only increases the urgency.

Amber Noel received her M.Div. from Duke University in 2012 after additional graduate coursework in theology and literature at Lee University. She lives in Durham, NC (USA) where she is exploring vocations in pastoral, artistic, and academic fields, and currently works as Assistant to the Director of Duke Initiatives in Theology and the Arts. In her spare time, Amber is either pursuing ordination as a deacon, eating breakfast, or watching Doctor Who. She has high-quality humans and/or cats around her most of the time.

Amber Noel Amber Noel received her M.Div. from Duke University in 2012 after additional graduate coursework in theology and literature, but she does not yet need glasses. She's worked as a teacher, writer, youth minister, and party-thrower, and lives in Dallas, Texas, where she pulls together various combinations of pastoral and creative shenanigans for the good of the church. She adores hot yoga, dubstep, and bedtime snacks, as well as spending time with fine humans and animals.