Editor’s Note: This is the second installment of a two-part article

If, as I argued in the first part of this essay, iconoclasm redirects attention, so, too, do images. One particularly dramatic example of that redirection was pointed out to me by picture theorist Horst Bredekamp during a group tour of the Bode museum in Berlin. He took us to a twelfth-century sculpture called Madonna of the Seated Wisdom, which is meant to be hung on the wall, above the viewer’s head. Looking up at the sculpture, I first saw the Christ-child, reaching out toward me with one hand extended in blessing, the other holding the gift of bread. But as my gaze floated just above the head of the Christ-child, I faltered at the more forbidding visage of the Madonna, whose lidless stare seemed to prohibit my eyes from lingering. The Madonna warned me to look away, even as Christ blessed me for looking. Madonna of the Seated Wisdom both dispenses blessing and cautions that a captivated gaze may become idolatrous, destroying the blessing the viewer has received. The statue facilitates an encounter with Christ, but only if the viewer does not confuse Christ with the statue.

I offer Madonna of the Seated Wisdom as an example, not because it is an aberration among images, but because it is exemplary of them. It dramatizes what all images, to the extent they are successful, do. They present what they are not. An image gives more than it literally or materially is, more than its wood and stone and paint. The danger, though, is that we might confuse what the image gives—say, a particular type of encounter with God—with the image’s medium. Images are always in danger of degenerating into idols. Alive to that possibility, the artist created Madonna of the Seated Wisdom in such a way that it might remind the viewer to direct her devotion to the God it makes present, not to its wood and paint. The sculpture does what all successful images do. It directs the viewer’s attention to what is important and true.

Images work by this redirection. They image when they present what remains in some way absent. This is the negation at the heart of imaging: the image gives what it is not. In the Orthodox tradition, icons are often referred to as windows into the divine, giving Christ’s personal presence without being identical to Christ. There is a sense in which, in a different way, all images are like windows, revealing to us what we would not otherwise see and making something present to us which yet remains absent.

But what if, for some reason, the window is blocked? Perhaps, as iconoclasts against the Confederate statues might argue, the image does not reveal anything because it projects a false screen. Or perhaps, as the Reformation iconoclasts might contend, the image obscures rather than gives the divine countenance because it is treated as an idol, or because the divine countenance cannot be given as an image at all. What, in such cases, ought one to do?

One might clear away the blockage. That is what an iconoclast does. An iconoclast responds to the failure of an image by shattering blocked windows and false screens so that we can see again. An iconoclast, in the words of another pope, John XXIII, might ‘throw open the windows of the church so that we can see out’. Iconoclasm redirects attention, as a properly working image does. Iconoclasm mimics the logic of the image that negates itself to present what it is not; it externalizes the negation internal to images. As it imitates the logic of images, iconoclasm also makes images. When Reformation iconoclasts whacked off the tops of crosses, they left a landscape of decapitated cross images. When present-day iconoclasts toppled a statue of a Confederate soldier in North Carolina, they took selfies with the remains. The broken image becomes a new type of image. 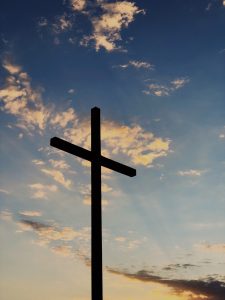 But how can this be surprising, when at the centre of the Christian tradition is the cross, where the Image of the Invisible God is revealed most poignantly in the moment of brokenness? It is in that most horrific act of iconoclasm, when humans attempt to destroy the Image of the invisible God, that the God who is Love is most poignantly revealed to us. On the cross, we see love that goes all the way through death by torture and never turns from its character as perfect love. The God of love turns neither toward fear nor hate, remaining perfect, vulnerable, impassible love, even under the greatest pressure.

Iconoclasm yields images as the broken body of the Image reveals God’s love. And iconoclasm redirects attention that has become locked on the wrong thing, dissipated into many things, or diverted to a secondary thing. ‘He is not here!’ The angel at the grave on Easter morning declares the absence of Christ. Like the iconoclast who wants to claim or prove that an image cannot contain God, this divine messenger informs the women that the walls of the tomb cannot contain the one who is Life itself. Do not look for the living among the dead. The angel redirects the gaze of the myrrh-bearing women.

Were the angel’s statement a description of how God is absent in the world, it would be declaration of despair, an announcement that God is dead and we have killed him.

Similarly, when iconoclasm is untied from any specific affirmation of God’s presence, it can lead not only to a dreary world: It can lead to a world in which the ability to name God’s presence ebbs away. The God whose presence everywhere demands that God be present nowhere in particular runs the risk of at last becoming a God who is simply nowhere.

But the angel’s declaration of absence is more than a description of divine absence. It is a way of redirecting the women’s attention from the dead to the living. The angel declares absence in order to proclaim a powerful new presence of Christ by the resurrection. The disciples’ first experience of the risen Lord is in absence.

Iconoclasm can be a powerful ally to both the Christian and the image. Certain forms of iconoclasm, as I claimed earlier, can be forms of fidelity of Christ, as they seem to be in the papacy of Francis I, as they can be for the church more broadly. There is work to do to distinguish iconoclasms that maintain fidelity to Christ and those that do not, but this work—rather than dismissing iconoclasm out of hand—is crucial to do. For, the iconoclast who clears away windows that have turned into barricades, or barricades masquerading as windows, imitates God. Such an iconoclast follows in the footsteps of Christ, who broke rules in order to reorient them to love, who overturned money pots to make space for true worship, who offered his broken body even unto death, shattering its power in a love that bent to no threat.