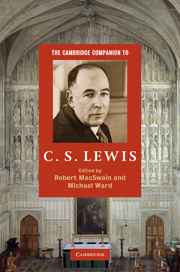 Cambridge Companion to C. S. Lewis, edited by Robert MacSwain and Michael Ward. Part of the Cambridge Companions to Religion series, this companion has twenty-one wide ranging essays grouped together under three aspects of Lewis’ career and his legacy:

Editors Robert MacSwain (University of the South, USA) and Michael Ward (University of Oxford, UK), reasonably suggest American Evangelicals have a tendency to adore Lewis uncritically, whereas British literature professors and theologians tend to dismiss his work out of hand, in part because of its popular appeal. As a panacea to this critical morass, MacSwain and Ward gather together an international cast of contributors and seek to take a holistic and critically even handed approach to Lewis and his work.

They set themselves an unenviable but valuable scholarly task, especially given that from the outset this companion is part of the Companions to Religion series as opposed to the Literature series. The editors admirably defend the inclusion of this companion in the Religion series. Either option (religion/literature), inevitably affects the way the volume is shaped. A literature volume would have the literary criticism and fiction at the centre, with theology and apologetics at the periphery, whereas this volume reverses that. Since Lewis is known equally well for his fiction and for his apologetics, there was no perfect fit, short of starting a Cambridge Companion Series of Authors-Who-Don’t-Quite-Fit-the-Current-Cambridge-Companion-Categories.

This is a fine collection of essays, and the sheer weight of scholarly reputation and prowess is enough to give one pause as we consider the list of contributors, including (but not limited to): Mark Edwards, Dennis Danielson, Kevin J. Vanhoozer, Ann Loades, Charles Taliaferro, Judith Wolfe, Paul S. Fiddes, Stanley Hauerwas, David Jasper, Michael Ward, Peter Schakel, Alan Jacobs, T.A. Shippey, Jerry Walls, and Malcolm Guite.

The publisher’s description for the volume is as follows:

A distinguished academic, influential Christian apologist, and best-selling author of children’s literature, C. S. Lewis is a controversial and enigmatic figure who continues to fascinate, fifty years after his death. This Companion is the first comprehensive single-volume study written by an international team of scholars to survey Lewis’s career as a literary historian, popular theologian, and creative writer. Twenty-one expert voices from Oxford, Cambridge, Princeton, and Wheaton, among many other places of learning, analyze Lewis’s work from theological, philosophical, and literary perspectives. Some chapters consider his professional contribution to fields such as critical theory and intellectual history, while others assess his views on issues including moral knowledge, gender, prayer, war, love, suffering, and Scripture. The final chapters investigate his work as a writer of fiction and poetry. Original in its approach and unique in its scope, this Companion shows that C. S. Lewis was much more than merely the man behind Narnia.

As you will see over the week, each of the reviewers offer robust criticism in the midst of seeking to read charitably. It has been quite a challenge to give each essay its due and offer points of discussion that we felt would best benefit Transpositions readers. I do not envy any book reviewer tasked with considering and attempting a review of the entirety of the companion in less than 1800 words.

One other brief point that made the reading of this book challenging for the purposes of review was the use of endnotes rather than footnotes. Quite a few of the reviewers remarked that they found it particularly inconvenient that endnotes were used given that many of the chapters cover quite a lot of detail of Lewis’ work and move between other works. While not quite resulting in the weeping and gnashing of teeth, it is worth noting. Nonetheless, it is an irritant most likely outside the control of MacSwain and Ward, given that this is a series-wide matter of style.

Finally, we were honoured to be invited to review the Cambridge Companion to C. S. Lewis, in no small part because Drs MacSwain and Ward are fellow graduates of the Institute of Theology, Imagination, and the Arts, and because this truly is a Companion of note. It remains to be seen how much the Companion will change the landscape of Lewis scholarship, but it certainly opens avenues of enquiry and draws together threads that enable a much more nuanced reading of Lewis as man, scholar, thinker, and writer. And for that, anyone who enjoys Lewis can be extremely grateful.

0
Facebook Twitter Pinterest
LinkedIn Email
Written By
Anna Blanch
More from Anna Blanch
In chapter 5 of For the Beauty of the Church, Barbara Nicolosi...
Read More