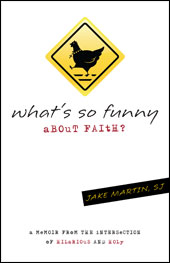 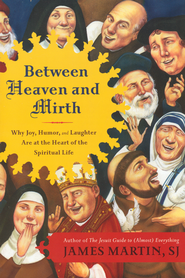 Jake Martin, SJ’s new (and first) book, What’s So Funny about Faith?: A Memoir from the Intersection of Hilarious and Holy, is a vocation story for the rest of us. Often, the vocation story genre attempts to share the author’s deep spiritual stirrings, the weeping and gnashing of teeth of the intense interior conversion and the heights of spiritual delight as one discovers profound joy in serving God. Jake,[1] in contrast, still seems quite bemused at how he, a professional comedian of uncertain faith (and even more uncertain adulthood skills), has wound up a theology student bound by vows of poverty, chastity and obedience, preparing to be ordained to the Catholic priesthood. But that bemusement opens up into an account of ordinary grace that eschews ersatz piety for a humble, self-deprecating, and funny story about finding God in all things – especially pop culture.

The book is loosely chronological – flashbacks and flash-forwards occur frequently – and covers the years from just before his father’s death, when he was six, up to just before publication, as Jake wraps up teaching theology and theatre at a Jesuit high school. Each chapter focuses on a new stage of life revolving around a particular theme, sprinkled liberally with Gen X pop culture references – ‘Scooby Doo and the Blessed Virgin, Too!’, ‘Smells Like Holy Spirit’, ‘Celibacy in the City’, and ‘Prayer in 140 Characters or Less’, to name a few.

Jake presents himself as a type of ‘sad clown’ figure – constantly searching for what will make him happy, whether it’s performing on Saturday Night Live (an unrealised dream) or getting a cat (who does become a close companion). As he gets closer to his true happiness in God, his attempts to appear on-top-of-things become even more humorously humbling – from his first meeting with the Jesuit vocations director, in which he has to explain that his ‘exposure to the Jesuits’ equals ‘saw them in The Exorcist‘, to his entrance into the novitiate, of which he writes:

The ride from Chicago to [the novitiate in] Berkley was about five hours, and I spent those five hours the same way I confronted all new and exciting prospects in my life: I slept in a fetal position in the backseat. Were I to have a name that truly defined my character and spoke of my essence, like a Native American name, such as Dances with Wolves, mine would be Sleeps in Backseat in Fetal Position. (92)

This self-deprecating humour is the fruit of humility earned by experience, and Jake’s presentation of himself with all his warts and foibles serves to point all the more to the generosity of God’s grace. Jake also shares mature reflections on the power of humour – especially the importance of a Christian humour that increases love, rather than a cutting humour that expresses contempt. (I was especially impressed by a comparison between the heart-filled humour of 30 Rock versus the ‘bullying’ humour of Family Guy – Jake is fluent in Television.)

What’s So Funny about Faith? is a very enjoyable read, especially for those of us who might not be willing to admit just how much of our identity we gained through movies and television. It is a refreshing apologia for popular entertainment – and is itself both encouraging and entertaining.

Fr. Jim’s book Between Heaven and Mirth: Why Joy, Humor, and Laughter Are at the Heart of the Spiritual Life is not memoir, but a practical argument for why humour should be a major part of the Christian’s life, including (and especially) church life. This is the book to give to your pastor who seems to want to loosen up and laugh from the pulpit, but feels constrained by a church culture which discourages ‘excessive levity’. (One dour priest quoted at the opening of the book scowls, ‘”All levity is excessive!”‘ [2])

Topics include joy as a sign of God’s presence, an analysis of why the Church has historically resisted laughter, examples of humour in the lives of the saints, the relation of joy to service, and ’11 1/2 Serious Reasons for Good Humor’, such as ‘Humor evangelizes’, ‘Humor is a tool for humility’, and ‘Humor speaks truth to power’ (not to mention ‘Humor is fun’!). Fr. Jim also makes practical suggestions for how churches and individuals can pursue the practice of Christian joy, especially in their prayer lives.

And throughout, of course, there are jokes galore, as well as anecdotes about Fr. Jim or his friends. These examples of humour help demonstrate the book’s point: that humour can strengthen relationships and keep us from taking ourselves too seriously, thereby keeping us open to others and to God’s action in our lives.

Both books are light reads, and can be finished in a day. However, that’s not to say that their effects don’t linger. I’ve found myself recommending both to friends, both as a source of enjoyment – they really are funny – and as a source of encouragement to laugh when confronted with ‘Real Religion is Serious’ talk (both from others and from oneself – Jake writes about a fear of comedic performing that he developed based on the mistaken notion that ‘”Saints can’t be funny… At the end of the day, saints suffer, and the more suffering the better”‘ [114]).

Let us hope for more books like these, and for a renaissance of joy in our churches – a joy which is ours to revel in, by baptismal right.

Cole Matson is a second-year PhD student in the Institute for Theology, Imagination & the Arts, studying the ethics of the artist-audience relationship in the theatre. He enjoys amassing a vast repertoire of Jesuit jokes (mainly from Jesuits).

1. To avoid confusion between the two J. Martins, SJ, I will refer to them as Jake and Fr. Jim. Having met both of them, and found them to be easygoing guys, I’m sure they will excuse the lack of formality.