At this point, any conversation about Ridley Scott’s 1982 film Blade Runner and its place in the canon is irrelevant.

Alongside Alien, Mr. Scott managed to create universes that transcend the simplicity of the storytelling and have so deeply influenced the filmmaking world that we now take their brilliance for granted. It was not the jump scares that made Alien classic; it was the art design by H.R. Giger, the field of alien eggs left untouched, the massive skeleton of the engineer locked into his pilot’s seat. It was not the pitiful excuse for a mystery[1] that put Blade Runner on the AFI’s top-100 list; it was… well, we will get into what it was. But suffice it to say that with both films, Mr. Scott created foundational blue-collar sci-fi worlds. They may have flown a “piece of junk” around the galaxy in Star Wars, but it still carried a princess and a messiah warrior and a venerable general. Mr. Scott’s worlds felt a little more like real life, filled with unremarkable people who were supremely vulnerable to the decisions of companies and the failures of governments and the hunger of beasts. It was an aesthetic that would cast a long shadow in the world of science-fiction blockbusters.

So to say that Blade Runner is not a great movie, at least on the storytelling front, is a meaningless gesture (even if it is true).[2]  I am not interested in telling the American Film Institute why it is wrong to rank Blade Runner as the 97th greatest American film of all time (and possibly, given its impact, they are not wrong). But before the mass of creative critical thought is launched against the sequel, Denis Villeneuve’s Blade Runner 2049, and Blade Runner gets some well-deserved time off from its relentless scrutiny, I am interested in asking one more question.

Why do people love Blade Runner?

To begin answering this question, we have to start with this claim: Blade Runner is inherently and intentionally unlovable. 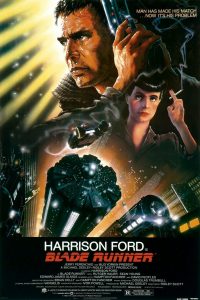 On the surface, Blade Runner has all the trappings of solid pop film-making.  Harrison Ford as a future detective, flying cars, androids (called replicants in the film), and a budget to match.  As a kid barred from R-rated movies, I remember looking over the VHS from the library and deciding adulthood must not be so bad. The idea of Han Solo/Indiana Jones/Jack Ryan hunting androids was the kind of stuff my fantasy-obsessed dreams were made of. Even the film’s name sounded like a Sega Genesis game.

But then there is the movie itself. There is a certain type of breathless joy that can be found when Blade Runner kicks up and you realize that all that stuff was just a facade. Somehow Ridley Scott had put everything in place that a blockbuster required, then snuck this crazy, subversive, and masochistic film[3] right by the ever-vigilant censors who demand more action, sex, and stupidity. The facade is so convincing that I think some people deliberately choose to ignore the subversion of the typical hero narrative and spend their time making YouTube highlight reels out of flying cars. They ignore Deckard’s shooting a fleeing woman in the back or his being rescued not once but twice(!) at the moment of a pitiful death, and pretend that the “fight scenes” are awesome.  Deep down I think they know the truth and wish for a more traditional crime-noir narrative instead of the one they got.  But damn!  Did you see that shot of the flying car?

I am not entirely convinced that incredible world-building or intentional ignorance is enough to create the kind of fanbase that Blade Runner has sustained. Subversion is interesting, yes, but eventually the culture changes and the shock begins to subside and, along with it, the slavish devotion.

The dedication to Blade Runner, I believe, comes from its ability to take an inherent state of isolation and make it communal; as one of its filmic disciples might say, it allows us to “share the dream” of melancholy. The book upon which it is based, Do Androids Dream of Electric Sheep? by Philip K. Dick, opens with Deckard’s wife, Iran, (absent from the movie) using a “mood organ” to artificially set her emotion to a “six-hour self-accusatory depression” in the morning.

While Deckard vehemently disagrees with this decision, the subtext communicates that Iran is the one closer to an appropriate emotional reaction to the world around them, not Deckard with his willful ignorance. Realising how empty her apartment building had become, she realizes that to fail to feel despair would be an ‘absence of appropriate effect.’[4] She finds some pleasure, in other words, in the honesty of occasionally responding to the world with depression.  Blade Runner allows us to make the same choice.  It presents a reasonable reaction to an often menacing and unfeeling world.

Mr. Scott created a city devoid of families, wherein it is always raining and every abandoned building contains lost, unknown souls who spend their time wondering if they are truly human or not. It is the kind of world where people take quick breaks from fighting to say things like, ‘Nothing is worse than having an itch you can never scratch.’

If science fiction and fantasy are attempts to make the internal external, Blade Runner is a master class in this exercise: it is melancholy visualized and embodied.

The story itself hinges on the quintessential depressed question: ‘Do I have any value?’  Blade Runner is The Love Song of J. Alfred Prufrock of its time. Both works of art present worlds stripped of churches and authorities and families, leaving only individuals to wander the streets and wonder if they are truly human or just mere imitations.  ‘I should have been a pair of ragged claws/ Scuttling across the floors of silent seas,’ says Prufrock. Blade Runner is a visual expression of this same sense of how it feels to be crushed by a sense of worthlessness.

Given Mr. Scott’s canon, his response to this appropriate melancholy is unsurprising.  Mr. Scott is always meditating on Satan’s rebellion, particularly through the lens of a Romantic understanding of Paradise Lost (the original title of his most recent film was Alien: Paradise Lost). Set against God’s stasis, the Romantics saw Satan’s rebellion as an admirable expression of individuality. It is fitting, then, that Deckard’s plodding passivity and order-following is overwhelmed by the vitality of Roy, the villainous replicant desperately seeking to extend his life and ultimately murdering his creator.

After being hunted for the entirety of the film, Roy has an opportunity to kill Deckard. Yet as Deckard hangs onto the ledge of a building, Roy suddenly comes to terms with the fact that his own time is running out; his replicant lifespan is coming to an end. All his anger and frustration at his short, meaningless existence have purchased him nothing. And so he lifts Deckard up and utters these words as he dies:

I’ve seen things you people wouldn’t believe. Attack ships on fire off the shoulder of Orion. I watched C-beams glitter in the dark near the Tannhäuser Gate. All those moments will be lost in time, like tears in rain. Time to die.

As we hear these words, we remember the opening shots of the film:  a haunting, dystopian Los Angeles landscape and an eye, framed as larger than the city itself, taking it all in.

In this last moment, Roy accepts that his creator was evil, that he is finite, but that the world has beautiful things in it. He quits trying to run away from the implications of his experiences and life, and heads in towards them. Follow the beauty, the movie seems to say, and it says this in a movie that, like much of life, is dark and hopeless in many ways but is also, oddly, beautiful. Witnessing the beautiful, like the anonymous eye in the opening, makes you valuable, which explains why Roy’s final act of vengeance is to make his creator meaningless by mashing in his eyes and, ultimately, why he saves Deckard. Roy wants someone to know that he has seen beautiful things. He wants someone to know that his life has meaning.

Deckard immediately applies this lesson to his own life and finally makes an active decision, running off with his replicant lover. He decides that the traditional framing of life’s fundamental question – what is my identity? – is irrelevant. Identity does not give value, only experience. 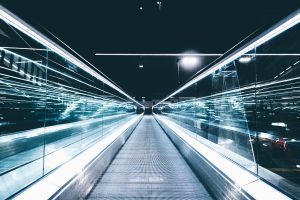 The reason the original cut of the film does not clearly answer the question as to whether Deckard is a replicant or not is because the answer to that question no longer matters. Deckard does not care whether or not he is human. He has accepted Roy’s view that it is better to live a life of “freedom” than to submit to any sort of commands, whether those commands be divine and personal or programmed and mechanistic. He is ready, as Paul mentions in 1 Corinthians, to ‘eat and drink, for tomorrow [he] dies’; he is ready to pursue the beautiful. Even if that beauty is artificial.

This is close to wisdom. It is an embrace of one’s limitations, which in many ways feels like the beginning of worship (worship being an act of dependence). But once you strip away the call of the eternal and the imago Dei, those limitations leave you without any comfort. In this scenario, that nagging sense of isolation is not a lie but the truest sense of our actual situation. In the words of Captain Mal from Firefly, “we all die alone.” There is no true, lasting communion.  There is only us and then there is only nothing.

We love Blade Runner because we know what it feels like to wander through a waste of a once hopeful tradition, wondering where we now belong while desperately trying to ‘prepare a face to meet the faces that you meet.’ And we love Blade Runner because our answer to the feeling of melancholy and the question of our value has often been the same as Roy and Deckard’s.  iPhone in hand, we march from moment to moment, searching for the beautiful, letting the world know that we have seen it, yet ultimately never escaping ourselves and the sense of the encroaching nothing.  ‘I have seen things’, we say, ‘you people wouldn’t believe…’

[1] As Harrison Ford said: ‘I played a detective who did no detecting.’ Shone, Tom.  Blockbuster: How Hollywood Learned to Stop Worrying and Love the Summer (New York: Free Press, 2004), 116.
[2] Scott regarding Blade Runner: ‘It was a new kind of film: because the world was almost as important as the story.’ Ibid., 117.
[3] ‘It is an extremely dark film, both literally and metaphorically, with an oddly masochistic feel, but [Scott] explains explains that he made it in the wake of his elder brother’s death and “I liked the idea of exploring pain.”‘ Barber, Lynn.  “Ridley Scott.” The Observer. Jan. 6, 2002.  https://www.theguardian.com/film/2002/jan/06/features.awardsandprizes
[4] Dick, Philip K. Do Androids Dream of Electric Sheep?  in Philip K. Dick: Four Novels of the 1960s (The Library of America: New York, 1962), 436.