A Review of: Beauty Will Save the World: Recovering the Human in an Ideological Age, by Gregory Wolfe Wilmington, DE: ISI Books, 2011. 278 pages. 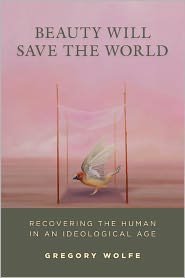 A Review of: Beauty Will Save the World: Recovering the Human in an Ideological Age, by Gregory Wolfe Wilmington, DE: ISI Books, 2011. 278 pages.

A few weeks back, my colleague Jim Watkins reviewed Steve Guthrie’s Creator Spirit: The Holy Spirit and the Art of Becoming Human. In a response to that review I noted what seemed to me to be the implicit humanism found both here and in other recent works on Christianity and the arts. Struggling to find an appropriate label, in my response I wrote:

Not everyone in the Christian community is convinced of the claims forwarded in Guthrie’s book, and sometimes I think the frisson in conversations about the arts and culture among Christians is not about good and bad art but just about the “Christian humanism” that I think lies behind and before much of what the current arts-theology movement is about.

A few days later and what shows up in the mailbox of Transpositions but Gregory Wolfe’s new book of essays culled from his writings in Image, the journal he founded and edits. In these essays Wolfe advances the thesis that our contemporary Western society is riven by ideological constructs and conflicts that fail to do justice to the deeper, perennial, pre-political dimensions of human experience. What is required, and what Wolfe found saving in his own experience, is the aesthetically astute and ethically principled resources of what he calls the tradition of Christian humanism.

In Wolfe’s account, Christian humanism finds exemplars in figures such as Thomas More, G.K. Chesterton, T.S. Eliot and in contemporaries such as Wendell Berry and Larry Woiwode.  At the heart of the Christian humanist ethos, according to Wolfe, is an irenic spirit, a sensitivity to irony and the “tragic sense of life,” a commitment to the imagination as a primary moral faculty, and a commitment to an assimilationist, as opposed to a typically conservative adversarial or typically liberal accomodationist, stance towards the world at large. For Wolfe, Christian humanism holds the promise not only of retrieving the idea of the stewardship of culture, but of something even larger:

The tradition of Christian humanism always held that the secular forms and innovations of a particular time can be assimilated into the larger vision of faith. That is why T.S. Eliot could adapt modernist poetics to his Christian convictions, or Flannery O’Connor could take the nihilistic style of the novelist Nathaniel West and bring it into the service of a redemptive worldview. Only a living faith that is in touch with the world around it can exercise this vital mission of cultural transformation. [21]

The first two sections of the book chart Wolfe’s general critique of the contemporary situation and his case for Christian humanism. The remainder of the book is a series of articles on writers, artists and “men of letters” (including Russell Kirk and Gerhart Niemeyer with whom Wolfe studied) who exemplify this orientation.

Wolfe recounts his own journey in the heartland of ideological conservatism with a mixture of wince and wistfulness. Wolfe manages to gain the Intercollegiate Studies Institute imprimatur, however, because a fundamental conservative insight guides much of his project. Wolfe sympathetically writes, for example, how for Evelyn Waugh,

…civilization is a precarious artifact, not a natural condition. Without the inner ordering which a living faith in a transcendent creator entails, he believed, the external ordering of society would become brittle and collapse into fragments. [109]

And it is the brittleness and bitterness of contemporary debates about civil matters that Wolfe feels the “intuitive language of the imagination” can and must positively contribute to. Art does this not by avoiding difficult things and emphasizing feelings, but by being an alternate mode of reasoning and understanding. Wolfe believes the arts can counterbalance the pragmatic and utilitarian ethos of political efficiency with “the necessary contemplative space that pulls us back from the realm of action in order to send us back wiser and more fully human” [22].

Wolfe issues the familiar indictment against Medieval nominalism of ushering in the modern temper, with the worst aspects of American Puritanism seeming to function as a proxy for Protestantism in general, and draws on a gallery of heroes almost exclusively from the ranks of the Catholic Church. It’s a Catholic humanism that is being advanced in these pages. In the course of these dispatches, however, Wolfe raises compelling questions about the relationship between nature and supernature and how this sets the stage for a theology of culture. For Wolfe, the Catholic theology of grace perfecting nature provides more hospitable soil for the cultivation of an integral humanism. But is there a corresponding potential in the Protestant theology of grace converting nature? Are these two orientations in permanent opposition? Are there points of reconciliation? Perhaps Steve Guthrie’s book might serve as a Protestant response to questions such as these. Vigen Guroian’s accessible reflections on Orthodox Christianity might likewise provide another perspective on the relationship between grace, nature and their integration in human culture.

Written in a journalistic style, Wolfe’s book is an easy and pleasurable read, and with essays that introduce readers to contemporary figures such as artists Makoto Fujimura and Fred Folsom (itself worth the price of the book) and writers such as Geoffrey Hill and Shusaku Endo, the book is a welcome addition to the conversation about theology, arts and culture.