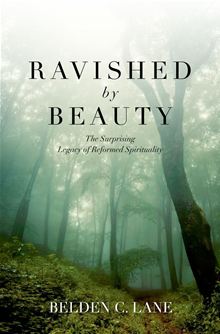 What does saving seeds have to do with splendor, or responsible waste disposal with wonder, or biodiversity with beauty? Everything, according to Belden Lane, especially when viewed through the lens of Reformed theology. For those who understand Reformed theology to be little more than dry doctrine fixated on divine sovereignty, this will come as a surprise. But as Lane unfolds in Ravished by Beauty: The Surprising Legacy of Reformed Spirituality

(Oxford, 2011), divine power is only one strain of Reformed spirituality. The other strain is divine allurement and the cultivation of desire. Moreover, Lane maintains that the best starting point for addressing the present ecological crisis is to be ravished and rapt by beauty, overtaken by delight, wonder, and enjoyment. Thus, Reformed theology is more relevant than one might have realized.

For instance, take John Calvin’s view of creation as a theatre of God’s glory. For Calvin, the whole world is a stage where God performs his marvelous works, and we catch a glimpse of his glory in clouds and rain, the same glory revealed in the crucifixion and resurrection. Of course, humans are not only spectators of this spectacle; we are full participants, beckoned by God’s beauty to respond in wonder and worship. In recognizing the pivotal human role in the theatre of God’s glory, however, one temptation is to view the rest of creation as merely a stage on which that theatre is enacted. Using Calvin’s theology as a launching pad, Lane rejects this perspective and prefers to see each member of creation as a full participant in this performance. As the Psalms often articulate, even the rocks and hills worship God, so “the whole of creation joins in an exultant, if often erratic, dance in response to the Trinity’s desire for connectedness.” Not only that, but all of creation laments together “in a common cry of lament, from urban lots filled with toxic waste to neighborhood children suffering from asthma” (222). In fact, Lane has such a high view of creation that he describes humans as “but poets and narrators of all that is mimed, danced, and sung so irresistibly by an enormous cast of characters on the world stage” (228).

Do we really believe this? If so, pruning those bushes isn’t just a chore; it’s an act of worship. Advocating sustainable agriculture is integral to Christian discipleship, not an optional extra.

Lane also draws heavily on the theology of Jonathan Edwards, who recognized true virtue as a disposition extending the beauty of God into “continually new expressions of loveliness” (194). Unfortunately, instead of responding to God’s beauty with more loveliness, many Reformed theologians have responded by trying to dissect beauty with lackluster logic and ugly prose. Or as Lane observes, “Reformed theology has been more absorbed in multiplying words than in entertaining mystery” (213). As a result, he calls for a renewal of Reformed mysticism, aided by ideas like the Buddhist concept of “interbeing.” But are there not enough resources within Christian theology itself to sustain a healthy dose of mysticism? What about the African concept of “ubuntu” utilized by theologians such as Desmond Tutu and John Mbiti, which views identity as constituted by interconnectedness and relationship with God, fellows humans, and the rest of creation? And this, of course, is grounded in robust trinitarian theology, the mystery of mysteries: God who is three is one, infinite Power and Beauty, in whom the whole universe holds together.

Unending delight in God’s beauty and obedience response to God’s holiness are intrinsically linked Reformed theology. Lane is absolutely right that “a Calvinist aesthetic remains restless until it expresses itself in moral action” (123). Fortunately, Lane is not the first or only Reformed theologian to recognize and articulate this connection. William Dyrness recently made a similar argument in Poetic Theology

. John W. De Gruchy has a powerful statement of the same in Christianity, Art and Transformation: Theological Aesthetics in the Struggle for Justice

. It would have been helpful if Lane had interacted with these contemporary voices, as well the historical ones. But it’s true that one book can only do so much, and this one has accomplished much. For avid readers of Calvin and Edwards, you may not be surprised by the legacy of Reformed spirituality outlined here. But for many who have never considered placing “Reformed” and “ravished” in the same sentence, there may be surprises in store on every page.

From your understanding of the Reformed tradition, is the connection between beauty and justice and the inherent rationale for environmental ethics a “surprising legacy” of Reformed spirituality? What other theologians or books do you know that have made similar connections?

To a preacher who kept saying, “We must put God in our lives,” the Master said, “He is already there. Our business is to…