Editor’s Note: In this second response to Michael Ward’s post, “The Next C.S. Lewis? A Note on Austin Farrer,” Professor Ann Loades gives a contrasting perspective. 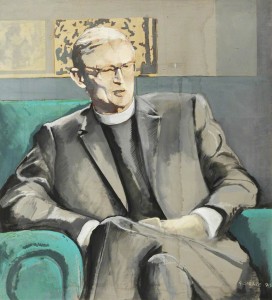 Whilst delighted that some attention is being given to one of the finest Anglophone philosopher-theologians of the last century, perhaps we could have Austin Farrer read in his own right, so to speak, rather than have him considered in relation to someone whose work has received an inordinate amount of attention just recently. Farrer is a very different ‘kettle of fish’ whatever may seem at an initial glance to align him with C.S. Lewis.[1]  Rob MacSwain has already made precise reference to the work of David Brown and Douglas Hedley in developing Farrer’s thought on the imagination in new directions, as well as MacSwain’s own work on Farrer’s philosophical legacy.

Apart from Farrer, it is high time Lewis in any case needs to be put in context with, for example, D.M. MacKinnon, K.E. Kirk,  Evelyn Underhill, Helen Waddell, and B.G. Mitchell, not forgetting two of his still living contemporaries, John Lucas and Helen Oppenheimer. There are dimensions of doctrine Lewis never explored and in respect of which some of his contemporaries, and especially Farrer, have much to offer. The bottom line, may one suggest, is that preoccupation with any one contributor to the Christian tradition, however initially attractive and apparently authoritative, may result in academic and spiritual stultification. I am thus grateful to Ward for turning our attention to Farrer and encourage further exploration in this direction.

[1] See, for example David Hein and Edward Hugh Henderson (eds.), Captured by the Crucified.The Practical Theology of Austin Farrer  (T&T Clark, 2004) and bibliography, and the same eds. C.S. Lewis and Friends: Faith and the Power of Imagination (SPCK, 2011).