I have previously suggested, and at least once repeated, that a rightly Storied theology of the arts, one that acknowledges art as created good and redemptive word, maintains the tension between the uselessness and usefulness of art. Along these lines, I have quoted Makoto Fujimura (who is drawing upon Nicholas Wolterstorff), as well as Roger Scruton, the British writer, philosopher, and self-proclaimed skeptical Anglican, who has suggested that the relationship between intrinsic and utilitarian values is exemplified by friendship, which “is supremely useful, so long as we do not think of it as useful.”[1] 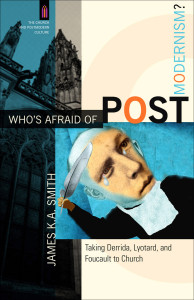 This seems an appropriate place to begin for it brings us to the crux of the conversation: legitimation. In his Who’s Afraid of Postmodernism: Taking Derrida, Lyotard, and Foucault to Church,[2] James K.A. Smith questions the standard reading of Jean-François Lyotard. In his The Postmodern Condition: A Report on Knowledge, Lyotard notes: “Simplifying to the extreme, I define postmodern as incredulity toward metanarratives.”[3] Smith summarizes the standard reading of this well-known definition as follows: “if postmodernism is incredulity toward metanarratives, and Christian faith as informed by the Scriptures is just such a metanarrative, then postmodernism and Christian faith must be antithetical.”[4] The issue for Smith, however, is that we have misunderstood what Lyotard meant by “metanarratives.” He notes:

What is at stake for Lyotard is not the scope of these narratives but the nature of the claims they make.  Put another way, the problem isn’t the stories they tell but the way they tell them (and, to a degree, why they tell them).  For Lyotard, metanarratives are a distinctly modern phenomenon: they are stories that not only tell a grand story … but also claim to be able to legitimate or prove the story’s claim by an appeal to universal reason.[5]

The central tension for Lyotard is not between big stories and little stories or global narratives versus local narratives.  Instead, he formulates the tension as a conflict between science and narratives …. The question of the relation between modernity and postmodernity revolves around this issue of “legitimation.” Modernity, then, appeals to science to legitimate its claim …. Science, then, is opposed to narrative, which attempts not to prove its claims but rather to proclaim them within a story.[6]

Clearly, the situation Siedell describes is problematic. Art ought not be thought to possess integrity only insofar as it tells us what we already know (i.e., the version of interpretation critiqued by Siedell using Sontag). And yet, I wouldn’t want to say, as Siedell does, that “art exists in the world in its own glorious singularity.”[9] For here it seems as though the claim goes beyond art needing no external legitimation (e.g., science as in the modern metanarrative Smith describes) to it needing no legitimation at all, whether metanarrative or narrative, in which case Siedell’s art sounds a lot like Smith’s science.

Of what use is Story?  In this case, Story makes way for use, for the Story moves from Creation, through the Fall, to Redemption and New Creation. Creation is gift, and our responsive creation needs no justification. It is free to be useless. And because it is given and useless it can be used … so long as we do not think of it as useful.

Editor’s Note: This is the second post in a two-part series.  The first, titled “The Invention of the Creative Person,” suggested that the identity…