[EDITOR’S NOTE: In this first essay of our ‘Christian Doctrine and the Arts’ series, ITIA Master’s student Anthony Mangin explores the links between art and ritual through considering liturgical practice as ‘theodrama’.  For more information on this series, see the series introduction.]

Art and ritual are inexorably linked. It appears that both are kinaesthetic, both involve action. Creating works of art requires time, movement, and gesture (which are all important aspects of ritual). Not only do art and ritual overlap, arguably they are essential and concomitant aspects of one another. To participate in one act, one will encounter aspects of and be bound to the other.

Scholar of religion Catherine Bell defines ritual as: ‘a type of functional or structural mechanism to reintegrate the thought-action dichotomy, which may appear in the guise of a distinction between belief and behaviour or any number of other homologous pairs.’[1] According to Bell, there is an intertwining of thought/beliefs and action inherent in ritual. Meanwhile, art can be defined as ‘the expression or application of human creative skill and imagination.’[2] In light of these definitions, I propose that thought/belief and action are integral parts of both ritual and art. Both are birthed from, or influenced by, these two postures. Humans are ritualistic, as consistent participants in ritual via religion, social organisations, or philosophically like-minded groups. Human beings, as bearing the imprint of the Creator, also carry an innate creativity. JRR Tolkien, in his essay ‘On Fairy Stories’, discusses this idea of the human being as sub-creator: ‘Probably every writer making a secondary world, a fantasy, every sub-creator, wishes in some measure to be a real maker, or hopes that he is drawing on reality: hopes that the peculiar quality of this secondary world (if not all the details) are derived from Reality, or are flowing into it’.[3] If we expand Tolkien’s ‘writer’ to include all artists, we find the same desire in these vocations that burn from within. This idea is manifested within liturgy by ‘creating’ a world that is ‘hyper-real’ unto itself inside the church. Congregants and priests collectively envision and participate in a ‘secondary world’ that flows into reality. We can conceivably imagine this as a picture of the Kingdom of God. In this article, I examine the relationship between ritual and art by considering liturgical practice as theodrama. 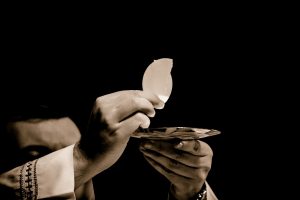 Art and ritual are combined in the Mass. These two expressions constitute the way congregants and clergy respond to the Divine. Liturgy engages the senses in a way that correctly orders humanity in relation to the Trinity.  Ritual, as gesture, and art are able to ‘teach the mind something which the mind does not know’[4] as the mind submits itself to practice and sensuality. While we should be wary of cutting off the reasoning capacity of the mind lest we fall into base passions, the kinaesthetic experiences allow us to move beyond what is comprehensible and toward the transcendent. I suggest that liturgical practice can be viewed as theodrama, or as a play in which we all have parts. Theodrama is ‘live performance in solidarity with others of Christ’s all-encompassing mission to the world. It has a fundamentally ecclesial character’.[5] Our participation in the liturgy constitutes this ‘live performance’ of the dramatic action with the Trinitarian God, who also is a dramatic mover. Catherine Pickstock, in her book Aspects of Truth: A New Religious Metaphysics, compares liturgy to art. She writes about the ways in which our participation in the liturgy—the movements, gestures, prayers, acts—can teach the mind something it does not know.[6] Art, and its place and function within the liturgy aids in this ‘teaching’. Describing the liturgy, Pickstock argues that ‘the eternal elevation of Christ’s human nature, including his body, to unity with the godhead’ means that:

…all human sensation is likewise eternally raised above its originally created dignity…the human body is now, after the Incarnation, more porous to the passage of the divine light. The liturgy is therefore a play of the newly transformed and heightened or intensified senses, beckoning the intellect to follow the senses back into the divine ludic economy.[7]

The liturgy now becomes a ‘play’. Our human bodies and roles have become elevated through participation in this play, due to the Incarnation and elevation of Christ’s human nature. As a congregant we are not merely mulling about in a quotidian manner, but actively—and dramatically—participating in an elevated arena where we encounter the Trinitarian God.

Liturgy within the current era is culturally peculiar, as it features clothing and objects that are only appropriate in the context of this liturgical theodrama. Items like the monstrance are visually captivating, holding the Blessed Sacrament of the transubstantiated body of Christ. This liturgical item is often shaped as a sun, the star which is located at the centre of our solar system and to which we orient our days, nights, and seasons. Similarly, our lives are to be oriented towards Christ in every moment, hour, and season. This item has no function outside of the liturgical drama. It does not need to, as its beauty and function are designed solely for the senses within the liturgical city (that which is manifested inside the confines of the church). Clergy wear vestments that are distinct from the pedestrian garb worn 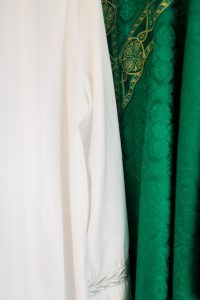 outside the walls of the church. Chasubles orient the worshipper to the liturgical season through colour, providing guidance within a divine time that is outside of the worldly time known beyond the walls of the church. The chasuble is seen as the ‘yoke of Christ’ reminding the priest of their role as ‘another Christ’ in their participation in the sacrifice of the Mass. It can also be seen as the ‘seamless garment’ like the one Christ wore on his way to the crucifixion. These pieces remind participants that the Mass is not a quotidian event, but a sacred ritual to enter with reverence. Clerical clothing and functional tools are properties of the theodramatic art—like the costumes and set pieces in a play. These pieces, like in the dramatic play, take on an iconic effect indicating something hyper-real beyond what is experienced in the everyday. Here we find ourselves participating in the great theodrama alongside fellow Christians, becoming part of the greater ecclesia in relation to the Creator God.

Like the priest donning his liturgical clothing, the congregation dons a role in the play of the liturgical ritual. The congregation identifies with Mary becoming bride to the Bridegroom that is Christ.[8] This role inverts the hierarchy of genders as Mary has been elevated as the first amongst mortals, bearing the fruit that becomes the Eucharist in which we find our salvation.[9] In our association with Mary we experience weakness and strength. Weakness in our mortality and humanity, strength in being able to receive divinity.[10] In our liturgical acting in the liturgical play, we experience the inversion and reshaping of reality that occurs in our ritual interactions with God.

For liturgy to manifest as a means of grace, the congregation must also be invested in the gesture of the ritual act. Like actors methodically learning their lines and hitting their marks, parishioners need to learn the gestures, language, and rhythms related to the communal sharing of the divine mystery. This performance of liturgy becomes the divine art of humanity—ontologically visualising the roles of creation and Creator. In our actions we embody the mystery of faith, like actors on a stage embodying the personality or mannerisms of a character. Through this embodied worship, we become more fully human and thus closer to the eventual fulfilment of the divine call.

Liturgy provides a clear example of how art and ritual are linked. Drawing upon Catherine Bell’s definition of ritual as the intertwining of thought/belief and action—and my position that art bears similar markers—it is clear that the artistic expression examined reveals this relationship. Within the Christian tradition, art can serve a catechetical function as well as codify theological tenets inexpressible through written word. Art, in the Christian context, is often subject to the primacy of ritual, but this does not denigrate its function or intimate that art is not an integral part of the overall tradition. While art has been created in response to ritual act, it has the ability to engage with the body and senses beyond mere cognitive ability. In fact, art is able to raise the tradition and the participant to be ‘more itself’ than would be possible without. Ritual can become ‘more real’ and humans ‘more human’ through artistic engagement.  Liturgy becomes theodrama within its own time and space, separate from—yet somehow a part of—the time congregants inhabit. In liturgical practice, congregants take on roles and gestures which orient themselves toward the object of worship (God) and embody the ineffable. Senses engaged by art and architecture allow congregants to lift the quotidian veil and experience the transcendent. These examples lead me to the conclusion that art is intimately linked with ritual and greatly enhances the ritual practice.