It’s certainly a strange phenomenon that all artists, poets, musicians, painters are unfortunate in the material sense — even the happy ones…That rakes up the eternal question: is life visible to us in its entirety, or before we die do we know of only one hemisphere?

Painters — to speak only of them — being dead and buried, speak to a following generation or to several following generations through their works. Is that all, or is there more, even? In the life of the painter, death may perhaps not be the most difficult thing.

For myself, I declare I don’t know anything about it. But the sight of the stars always makes me dream…[1] 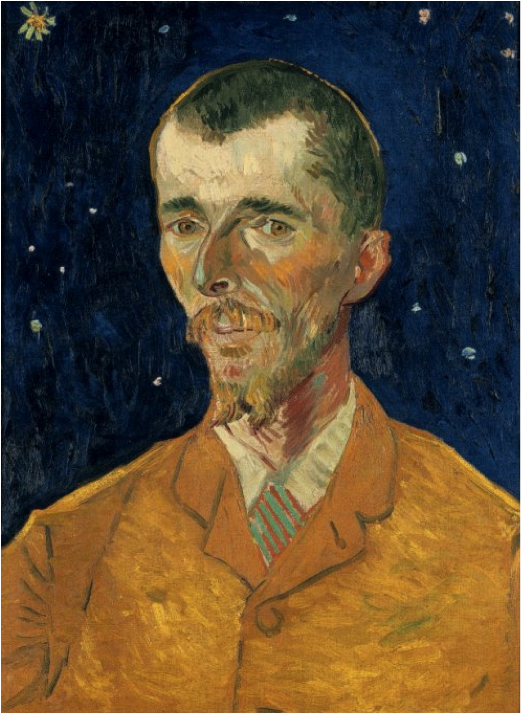 When I was first given the opportunity to write about art appreciation from an art historical perspective for Transpositions, I found myself with a sudden case of writer’s block. In my adventures in postgraduate studies, I have often found that art appreciation as a general practice is the subject of some ridicule. Art appreciation is not something that serious academics undertake, you see. Rather, it is what the armchair enthusiasts enthuse over. Unless there is a theory to analyze, or an –ism to tack on to the end of a discussion, art is simply not worth the debate. At least, this has often been my perception.

Yet, art and the appreciation of art is such an everyday presence in most of our lives; we don’t even realize just how much it reverberates throughout our day-to-day existence.  Particularly in a post-Mad Men era of marketing and consumerism in which we are constantly confronted by a barrage of images every day—from the film poster on the side of our morning commuter buses, to the advertising widget bar on our favourite blogs, to the last desensitizing television commercial of the night—that sometimes we fail to appreciate a good image when it stares us in the face.

This is not a new problem: T. J. Clark’s The Sight of Death, for instance,confronts the reader with these issues and eloquently analyses the ultimate effect of all these media distractions: the death of sight.  But as Clark resolves through his own journey into art appreciation—namely through the thorough documentation of his encounters with Nicolas Poussin’s Landscape with a Man Killed by a Snake—when we really stop and see, when we really stop and appreciate a painting, a photograph, a sculpture, or an installation, we are able to transcend that endless volley of images we see everyday and take those precious few seconds or moments to experience properly the piece of art that has engaged us.  It is this transcendent experience that matters.  Indeed, it is this experience that makes the process of appreciating art a powerful animal.

I believe that art appreciation is about this experience: the interaction between a piece and the viewer. We can theorize and philosophize about an artist’s manifesto, his use of color, or the political nature of his subject matter until our throats are parched and there are no words left to speak, but the truth of the matter seems to be that we understand a work more when we take the time to see it and appreciate its offerings.  Appreciating art is what makes it accessible to the masses: art is not the elitist country club some of us seem to think it is, really. Rather, I believe that the simple act of appreciation is the metaphorical gateway into the arts, which are open to all and boasts free admittance.

I am willing to make the bold assumption that at some point in all of our lives, whether we are a scholar, an enthusiast, a builder, or a brick-layer, we have all seen some piece of art in whatever form that was so beautiful, so magnificent that we have taken a few seconds—or minutes, or even hours—to let that image impact us. It is this sort of experience that finds us still thinking about a painting days after we have seen it, mentally retracing its lines and imagining its colours. More importantly, it is this sort of experience between art and viewer that has us still thinking, years later, that on that one trip to that one gallery, we saw something great.

Now, I have a confession to make: I have been one of those aforementioned academic snobs who cannot see the forest for the trees. I once sat in on a Masters-level course concerning the Golden Age of Dutch painting. The structure of the course was as such: little (if any) assigned reading and two hour classes geared around the discussion of slides. Where were the books on historical context? Where were the articles on the analysis of Dutch symbolism? What was I supposed to be learning, exactly? The answer became clear: I was learning how to see. Through my own Clark-like experience, I was being taught how to understand an image through the simple act of looking. I learned more from this approach than any other course I have ever taken in which I was actually enrolled. From this experience, I learned that it is not only OK to just appreciate art but also gained a boundless appreciation for Dutch art.

So boundless, in fact, that when I had to decide on a subject for a doctoral thesis, I found myself squarely situated with Vincent van Gogh through the Dutch masters who inspired his own venture into art. As one of the most historically underappreciated artists (during his lifetime, at least), van Gogh had a lot to say on the subject of appreciating art and subsequently appreciating the role of the artists who provide that art.

Van Gogh was a spiritual man and in his vast correspondence, he often mused over the contemplation of nature—created by God—as a means of spiritual communion. Stars, especially, were a significant theme in van Gogh’s work in the south of France. He created three of his most well known paintings while under their influence: The Night Café, Starry Night, and Starry Night Over the Rhône. Van Gogh’s fascination with stars is evident throughout his letters, though the implication of their prevalence has little to do with their glimmering beauty but with their symbolic, transportable quality.  To van Gogh, stars were a gateway to eternity, sparkling reminders of his belief in a God and the Infinite.

In his Portrait of Eugène Boch, van Gogh features his friend Boch, a poet, in a prominent yellow hue. The poet, an artist in his own right, stares out at the viewer from his position in front of an impossibly blue starry night sky. In his placement of Boch, van Gogh seems to have linked his friend, the poet, to his own ideas concerning the eternal.

Through the conduit of the stars, van Gogh has made the point, much as he does in the quoted letter at the beginning of this post, that the Artist, whether poet or painter, has contributed something to the ages; he has earned his place amongst the stars. His work reaches out through the guise of eternity to impact the viewer’s longing for an experience. Thus, it seems only right that as long as an artist is willing to provide us with the potential for that experience, we take the time to stop and see through all the other distractions and maybe, just maybe, learn to appreciate a good image when we see one.

Jenna Actaboski is a PhD student at the University of Essex in the department of Art History & Theory.  Her thesis, Sacred Complements: Faith, Literature, and Art in the Life and Letters of Vincent van Gogh, is due for completion at the end of 2011. Other research interests include Greek iconography, Renaissance frescoes, art and the Reformation, Surrealist filmmakers, and Mid-Century modern design.

Jenna Actaboski is a PhD student at the University of Essex in the department of Art History & Theory. Her thesis, Sacred Complements: Faith, Literature, and Art in the Life and Letters of Vincent van Gogh, is due for completion at the end of 2011. Other research interests include Greek iconography, Renaissance frescoes, art and the Reformation, Surrealist filmmakers, and Mid-Century modern design.

Wesley Vander Lugt is editor of Transpositions and a PhD candidate at the Institute for Theology, Imagination, and the Arts, researching the relationship between…