Author’s Note: This post is adapted from material in Apologetics and the Christian Imagination: An Integrated Approach to Defending the Faith, Emmaus Road Publishing, released May 2017.

What is the role of imagination in apologetics?

The imagination is connected to the divine nature; it is an aspect of our being made in the image of God; and thus it is a faculty that is vitally important – and all too often overlooked – in the work of apologetics. Yet imagination does not operate independently of reason; the two faculties are deeply interconnected.

Imaginative expression and propositional argument must work together, if our theological arguments and apologetics claims are to be both coherent and compelling. Propositional statements about doctrine or philosophy will do little or nothing if people do not find them meaningful, and if they are not embodied in some way, in life or art – but equally, narrative or aesthetic presentations need the bones and ligaments of specific ideas, doctrines, and philosophical claims, if they are to help people move toward the truth.

Theologian Austin Farrer once commented on C.S. Lewis’s book The Problem of Pain, saying that ‘We think we are listening to an argument, in fact we are presented with a vision; and it is the vision that carries conviction.’ [1] I would venture to differ somewhat with Farrer here, and suggest that Lewis’s great gift is that his writing is so thoroughly integrated. In The Problem of Pain Lewis does offer a ‘vision’ of the way he understands this issue, and invites us to enter into it. But it ‘carries conviction’ because it is also grounded in clear reasoning – in argument.

In fact, Lewis provides a very useful conceptual model for the way that imagination and reason can interact fruitfully. 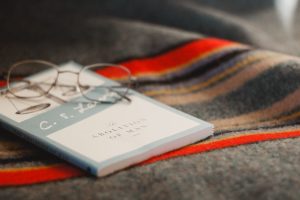 In “Meditation in a Toolshed,” C.S. Lewis distinguishes between looking at something and looking along something. To ‘look at’ something is to apprehend, to grasp something intellectually by reason, and is what Lewis elsewhere calls ‘Contemplation’: it takes the form of an exterior perspective on the thing that is being thought about. To ‘look along’ something is to comprehend, to engage with something experientially by the physical senses or by imagination. It is what Lewis calls ‘Enjoyment,’ and it takes the form of an interior perspective.

Our culture tends to privilege the analytical, detached viewpoint over the experiential one, to the point that looking at something analytically is often considered to be the only real way of knowing [2]; looking along something experientially is dismissed as merely subjective. As a result, skeptics tend to look at the faith as an object of study (and often censure) and seldom along it in an attempt to understand it from inside. Lewis saw the early stages of this process: ‘The people who look at things have had it all their own way; the people who look along things have simply been brow-beaten. It has even come to be taken for granted that the external account of a thing somehow refutes or ‘debunks’ the account given from inside.’ [3]

If we are limited to the outsider’s perspective, then it becomes difficult, if not impossible, to identify or articulate concepts of virtue or morality. For instance, if the outside view is the only way of considering the relationship between husband and wife, it is reasonable to conclude that when the relationship fails to produce the desired level of physical or emotional pleasure, the man (or woman) is justified in seeking a more satisfactory relationship. The man’s desire may be to cheat on his wife; why should he not? It is difficult to even articulate Christian ideas about marriage, let alone defend them, using only the analytical language of looking at things. Such is the situation with many, if not most, Christian ideas and claims in the broader culture.

However, Lewis is clear that both modes are necessary: ‘One must look both along and at everything. In particular cases we shall find reason for regarding one or the other vision as inferior. . . we must take each case on its merits.’ [4] Our fullest understanding of any truth comes when we both look at (Contemplate) it and look along (Enjoy) it, bearing in mind that both reason and imagination are involved in the operation of these two modes of seeing.

The Christian apologist must recognize that both of these perspectives are necessary aspects of knowing, and every human being naturally shifts between the two. Intellectual understanding can lead to a willingness to enter into a deeper engagement with meaning; an imaginative engagement with the Christian worldview can lead to a desire to seek out, or a willingness to hear, truth expressed in clear propositional form; and the fullest engagement with truth comes from an integrated experience of truth in both modes.

Architecture, art, music, and literature are particularly valuable for this integrated approach because they invite but do not impose. The skeptic is enabled to take a step inside, literally or figuratively, and to be involved in some way with this beauty. It may well speak to the longings of his heart, or it may unsettle him, provoke him to questioning and wondering.

Literature and the arts are not a substitute for teaching about doctrine, but they helps us see what doctrine means, and suggests that we might want to discover if it is really true.

In writing Apologetics and the Christian Imagination, from which the above is adapted, I have, in a small way, attempted to explore what an integrated approach might look like in practice as well as in theory. I have concluded each chapter with a poem of my own, thematically linked to the material that preceded it, but standing on its own – and inviting the reader to ‘look along’ as well as to ‘look at’ the ideas I have presented. Let me share with you, here, one of these poems.

Noon-tide on Saint Cecilia’s day, and here
In England’s royal church, I sit and watch
The winter sunlight streaming in, gold, clear,
Silent, pure, almost solid to the touch.
Nor is it fairy-gold; it does not fade.
For though that glorious beam of autumn light
Sank down to dusk, to darkness, died that day,
In living memory it still shines bright.
Within that golden light, the choir sings –
The notes resound in blood and bone, as if
I breathed the music in like air; it brings
Me to the point of tears, this time-bound gift
So unexpected, undeserved: a grace
To hold with joy through all my dying days.

0
Facebook Twitter Pinterest
LinkedIn Email
Written By
Holly Ordway
More from Holly Ordway
For by him all things were created, in heaven and on earth,...
Read More