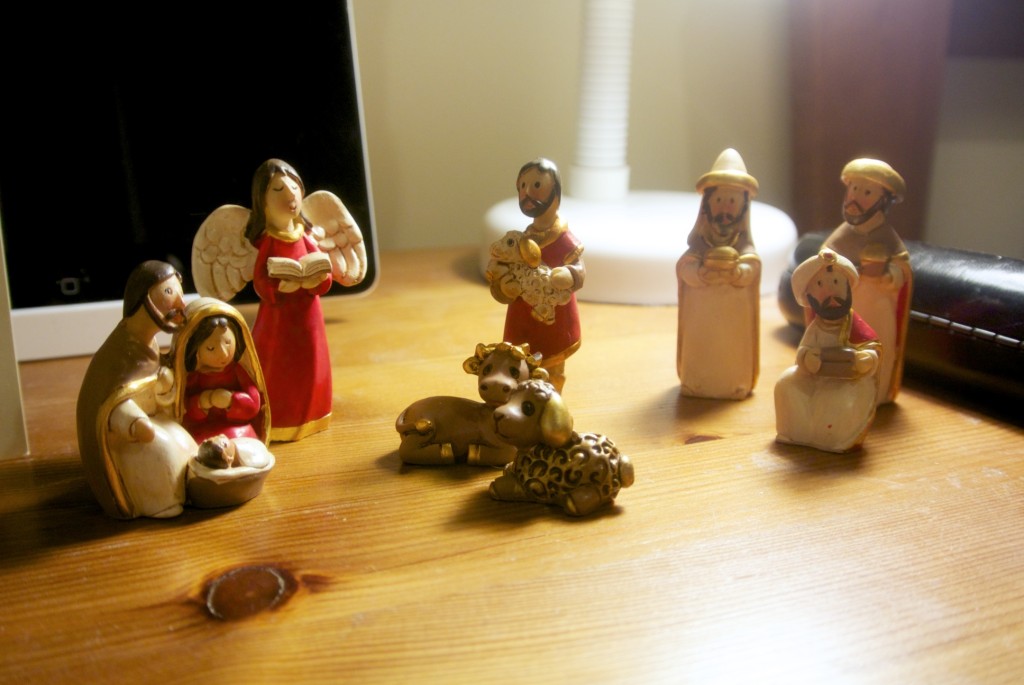 I have a small nativity set on my nightstand that my parents sent me from the States to remind me of home.

Mary and Joseph, holding the Child Christ, form a single piece. An angel holds forth a book—let us presume, for the sake of the beauty of the thing, that it is the Scriptures. A single shepherd carrying a lamb, another piece. An ox, another lamb, both separate, kneeling pieces. Three wise men, individual pieces, one bearing gold, one frankincense, one myrrh.

I grew up with a well-meaning grandmother who insisted, every year, that the wise men were to be placed as far away from the central scene as possible. St. Matthew’s Gospel account does not give us the impression that the wise men were present at the manger, but were later in the narrative, perhaps when the Holy Family had returned to Nazareth. My grandmother reasoned, therefore, that a strict observance of the actual, historical events of the Scripture was the most faithful way of teaching young children about their Creator.

But nativity sets like the one sent to me, perhaps teach us something about the mystery of sacramental reality, the event that ushers in the fullness of time, as St. Paul writes to the Galatians.

In the Church year, we observe the historical life of Christ in rhythm: conception to expectation to nativity to disclosure to ministry to suffering to death to resurrection to ascension to impartation. We journey this narrative through the Scriptures, through our lives, in the placing of nativity scenes and the lighting of Advent wreathes. We are caught up, in a sense, in the historical event that happened two thousand some years ago in another part of the world on a different cold night under a star that we perhaps no longer see. The historical event is somehow happening as if anew for us – this year, in this time, in this place.

As we say of baptism and the Eucharist, it is not that these things are once again enacting salvation or sacrifice, but that in and through them, we are, in the present, somehow caught up into that singular event so long ago that makes it possible for water to be hallowed, bread to be Body, and wine to be Blood.

Caught up, in a time that is not our own and yet is our own. Caught up, in the great drama of this cosmos, which moves forward with temporal time but is sustained by sacramental time.

Eternity came opportunely, when temporality was at its strongest.
St. Bernard of Clairvaux, from “Advent: Sermon One”

I think about those wise men, left too far from the manger. This year, I have brought them close, along with the shepherd, the animals, and the angel, crowding with Mary and Joseph to glimpse the Child Christ.

They are each a singular piece. They each must come in their own time, in their own way, to behold the One who formed them with His own hands.

But when they do come, eventually, sooner than later, or in the very last of all time if we are to believe the hymn to the Philippians—and I do—it is as if they had come in the beginning, to Bethlehem that one night, to behold the unfolding of things hidden since the foundation of the world.

We struggle with this, with time that is now but not now, here but not yet. We wrestle and compartmentalise. We forget.

We forget that Eternity chose to come into our temporality, to change temporality for eternity.

So the Lord of all makes a manger a throne.

So the Maker of His own mother takes to her breast.

So all who have come, shall come, do come, come as if on that first night, to that first Christmas, to where that first Infant’s cry broke firmament and cosmos and gulf to announce: God with us.

Editor’s Note: Transpositions will be taking a break for the holiday season and will return in the New Year on 7 January 2013 with an exciting announcement. Until then, we hope and pray you have a Blessed Advent and Merry Christmas.

Preston Yancey earned his undergraduate degree in Great Texts of the Western Tradition with a focus in medieval monasticism, literature, and theology from Baylor University. He went on to complete his Master of Letters in Theology, Imagination, and the Arts at the University of St. Andrews. His first book, Tables in the Wilderness:A Memoir of God Found, Lost, and Found Again, is due out with Zondervan September 2014.

Four models about the relation between science and religion have been proposed (Barbour, 1997): Conflict; Independence; Dialogue; and Integration (Fig. 1). The conflict model…