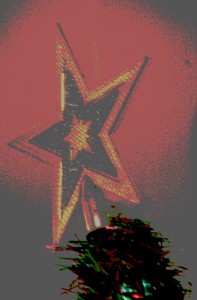 This is the first week of a new year; the new liturgical year, that is. But in the face of the end of civic calendar (at least in the West), the season of advent often seems like an add-on to an almost overwhelming amount of activity and bustle.

Last Sunday was the first Sunday of Advent. Advent is the liturgical season of preparation and anticipation before Christmas, a feast celebrating the birth of Jesus Christ.

9 The true light, which enlightens everyone, was coming into the world. 10He was in the world, and the world was made through him, yet the world did not know him. 11He came to his own,and his own peopledid not receive him. 12But to all who did receive him, who believed in his name, he gave the right to become children of God, 13who were born, not of blood nor of the will of the flesh nor of the will of man, but of God.

14And the Word became flesh and dwelt among us, and we have seen his glory, glory as of the only Son from the Father, full of grace and truth.

This time last year I was reflecting on an Australian experience of Advent. This year things are different. I’m in Scotland all winter long, all advent long. I found Sara’s discussion from this time last year of Rosetti’s In the Bleak Mid-Winter particularly poignant in light of my current circumstances.

But, Christmas is about family for me. And this year, I’m ambivalent.

It isn’t just that I’m a long way from home.  It’s that this is the first Christmas my family will celebrate since the passing of my grandmother, our matriarch. Christmas was her favourite time of year. She relished the preparations: the food, the family gatherings, the times of reflection and contemplation offered by the Advent season. It is from her that I learnt about the significance of each of the candles on an advent wreath, and from her that I realised the joy of sharing songs, and jokes and dressing up in silly costumes.

So, advent is a little different this year. This year it is about forging my own traditions. It is about relishing the beauty of liturgy, of thinking about the reason and meaning behind decorations, like the Christmas Tree and the Jesse Tree. It will be about taking moments to reflect on the ‘extraordinariness’ of Christmas.

Thus, it seems fitting to end my advent reflection this year with the same words that I ended last year’s:

If you are seeking some thoughtful and creative ways to mark the advent season, then let me heartily recommend an Emily Watkins article which presents a thoughtful and interesting way to mark the twelve days of christmas. Wes also explored Advent and Christmas through this post on “Staging the Incarnation” and Tyler Green’s Tumblr Advent Calendar for Art lovers is quite inspiring. Taylor Marshall’s “Top 10 Facts about Advent“ and Kurt C. Wiesner’s  piece in which he seeks to reframe and refocus Advent  are also thought-provoking.

0
Facebook Twitter Pinterest
LinkedIn Email
Written By
Anna Blanch
More from Anna Blanch
Enlarge the place of your tent, and let the curtains of your...
Read More