Advent might seem like a strange time to be thinking about death. As we approach the nascent joy of Christmas, it surely makes little sense to reflect on transience and frailty. In the festive glow of lights, flurry of preparations and building excitement, to turn to matters of mortality can feel perverse. Yet advent is not only about looking forward to the birth of Jesus. A vital yet increasingly overlooked aspect of the Advent season is the anticipation of Christ’s second coming – the Parousia.[1] This eschatological dimension involves questions of the Kingdom, the end of time and the resurrection of the dead.[2] To hold together the birth of an infant and the raising of the dead can feel like a challenging act of imaginative exertion. But this is exactly what C.S. Lewis attempted when he replied to a letter from my grandmother on the 30th of November 1948. 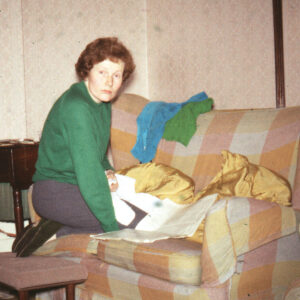 Moving into the Advent season, Lewis was confronted with a theological conundrum concerning the resurrection and restoration of the human soul. My grandmother, Elizabeth Bowlby (née Munro), was looking for answers to difficult questions raised by the prolonged illness and eventual death of her father. Having watched her father’s mind and body deteriorate, Elizabeth was anxious about the life to come. What, she wondered, would happen to a soul so worn and a body so frail when Christ returned, and the final resurrection came?

Unwittingly, Elizabeth had – in asking Lewis for reassurance and guidance – touched on a painfully relevant subject. In his reply, Lewis explained that the letter ‘came more a propos than you could have expected’.[3] Lewis was, at this time, caring for Jane King Moore, the mother of a friend who had died during the first World War.[4] Moore’s condition had been deteriorating since a stroke in 1944, so concerns about the impermanence and vulnerability of humanity had already been at the forefront of Lewis’s mind. In Advent, serendipity and tragedy brought together two people caught up in grief and anxiety, seeking answers to questions about mortality and eternity. Dietrich Bonhoeffer describes Advent as a season for the ‘troubled in soul’, and this is what both Lewis and Elizabeth experienced as they entered the long nights of December.[5] During their agonising vigil, watching death strengthen its hold, their thoughts turned to the Parousia, and to what the final resurrection would hold for those they cared for.

Lewis met this theological challenge with a characteristic blend of insight, ingenuity and empathy. Comparing senility to the relaxing of reason during sleep, or the loss of consciousness and control during surgery, he made a profound case for the restoration of the soul:

[H]aving seen people wake from sleep and ‘come round’ from faints or operations, I find no difficulty in believing that God will restore to the soul which is gradually losing touch with the earthly organism another organism in which it will function better than ever.[6]

Addressing Elizabeth’s apprehension directly, Lewis continued by affirming that in the resurrected state, ‘the total man, here divided up into all his moments will in some unimaginable way co-exist so that all your Fathers (his childhood, manhood, and old age, asleep and awake) will meet you’.[7] Here, the strange Advent intermingling of infancy and old age, birth and death, comes into view. Lewis is looking forward to a time when the unimaginable will become possible and real, with all stages of life unified in the ‘total man’ (or woman). In 1948, his Advent began with an exercise in mental gymnastics drawing together new life, failing life and eternal life. 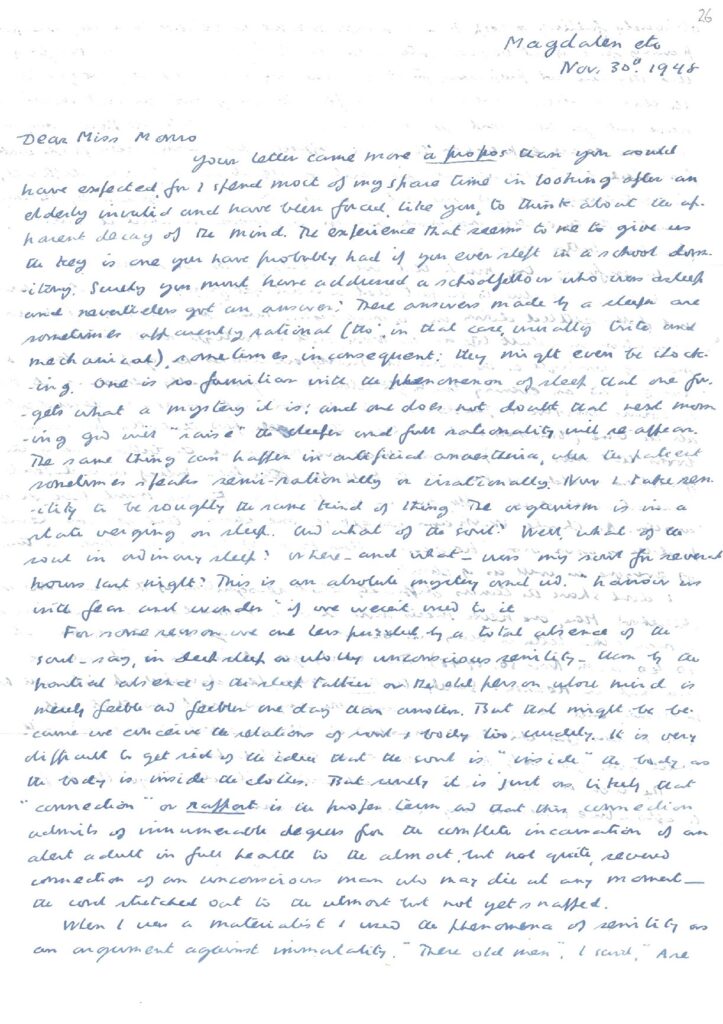 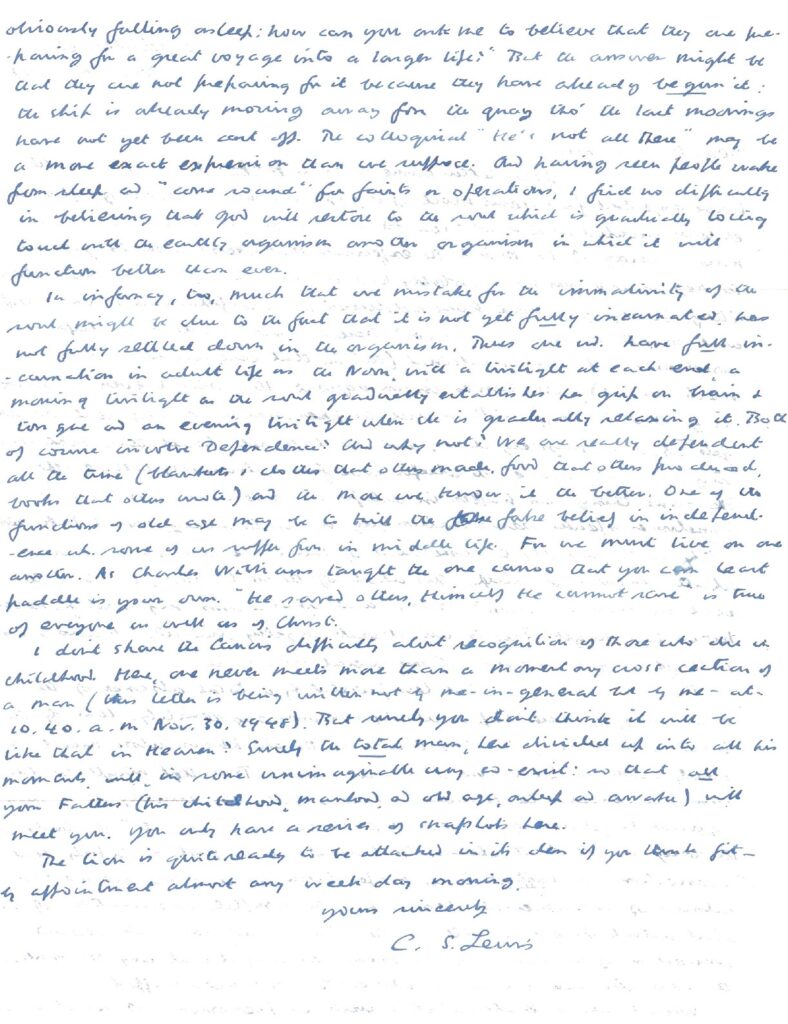 Developing his argument, Lewis reframes old age as a return to the same liminal state into which we are born. In infancy, he suggests that ‘much that we mistake for the immaturity of the soul might be due to the fact that it is not yet fully incarnated’.[8] Meanwhile, the onset of senility is an ‘evening twilight’ during which the soul is gradually ‘relaxing’ its grip on the ‘brain and tongue’.[9] There is much that could be said about the theology that is unfolding in Lewis’s letter. His interest in the resurrected body is well documented,[10] but his conception of life ‘with a twilight at each end’ is worth investigating further.[11] In Lewis’s eyes, the soul relinquishing its hold on mind and body at the end of life is every bit as natural as a new-born child slowly gaining mastery of speech, movement and thought. And as the ‘twilight’ of infancy is a preparation for adult life, so the struggles of old age precede the souls eventual return as a ‘total’ person. There may also be a christological significance to this idea. Whilst Jesus never experienced the torments of senility, he knew the ‘twilight’ of emergent life. So, Lewis appears to imply that the full humanity of Jesus included a phase in which he felt what it was like to be something other than ‘fully incarnated’ – entirely human, but not yet in complete control of physical and mental functions. For those at the end of life troubled by an analogous lack of control, this thought might bring comfort. Even if it is stretching Lewis’s argument to reach this conclusion, it is worth considering what the full implications of his claims might be.

It may also be worth reflecting on Lewis’s letter to Elizabeth in light of the wider context of his career. Advent in 1948 came as the final season in a defining and tumultuous year for Lewis. He had faced, in February, fierce criticism during a debate with Elizabeth Anscombe in which his theological positions had come under intense scrutiny. Many scholars suggest that this explains his move toward children’s fiction and away from theological apologetics.[12] But what if this change in direction was also motivated by, amongst other things, Lewis’s interest in the ‘twilight’ phases of life? Clearly, in December 1948 he was not preoccupied with the ‘full incarnation’ of adult life so much as ‘the twilight at each end’.[13] His letter suggests an imagination and intellect ready to engage in a novel, perceptive way with the formative adventures of childhood. When he wrote to Elizabeth, Lewis was already in the process of drawing together inspiration for The Lion, the Witch and the Wardrobe. So, his decision to focus on those experiencing early life, before the ‘norm’ of ‘full incarnation’, is surely related to his interest in our twilight times. There seems to have been something about these liminal stages that captured Lewis’s attention as he began to use children’s fiction as a means of theological exploration. Souls gradually settling into embodied existence became the model for his central characters as Lucy, Edmund, Susan and Peter ventured into Narnia.

His letter suggests an imagination and intellect ready to engage in a novel, perceptive way with the formative adventures of childhood. When he wrote to Elizabeth, Lewis was already in the process of drawing together inspiration for The Lion, the Witch and the Wardrobe.

And it is also important to recognise that Lewis was not, as he began to write these stories, envisaging childhood as a singular stage in our human development, but as a part of a cycle. He tells Elizabeth that both twilight phases ‘involve dependence’, adding that:

One of the functions of old age may be to kill the false belief in independence which some of us suffer from in middle life. For one must live on one another. As Charles Williams taught, the one canoe that you can least paddle is your own. ‘He saved others; himself he cannot save’ is true of everyone as well as of Christ.

Perhaps this brief excerpt represents part of the explanation for why Lewis was drawn to write children’s stories. As a child, our illusions of independence have not yet solidified. We might still be able to ally a Christlike commitment to others with an awareness that – like Jesus – we cannot save ourselves. This openness to dependence may, in Lewis’s mind, have made for characters better prepared to receive the mystery and enchantment of the world beyond the wardrobe. Yet this emphasis on dependence also adds a new value and significance to old age and senility. As we approach our end, we have a second opportunity to embrace the truth of our reliance on others. We can, perhaps, more easily appreciate the form of love that comes when we see ourselves as vulnerable creatures, lost without the love that our neighbours or God offer. 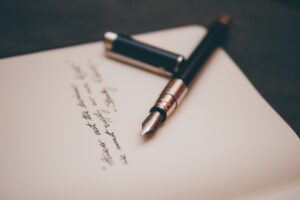 So, as Advent began in 1948, Lewis was thinking about beginnings and endings – the ending of one stage in his theological career and the start of his time as a writer of children’s stories; the first and last twilights of life; the arriving infant Jesus, and the Parousia and eschaton when the ‘total’ person will be reborn in glory.

[2] Joost Holleman, ‘The Idea of the Eschatological Resurrection Coinciding with Jesus’ Parousia’, in Resurrection and Parousia (Leiden: Brill, 1996), 67-76.