[Editor’s Note: We continue our series on The Saint John’s Bible with the second of three visio divina Advent reflections on illuminations at the beginning of the Gospels of John, Matthew and Luke. This week, Emilie Grosvenor reflects on the frontispiece illumination for the Gospel of Matthew.  For an introduction to The Saint John’s Bible and this series, click here.]

The days preceding this visio divina of Matthew and its accompanying illumination in The Saint John’s Bible, I had a personal epiphany on the significance of the Advent season. Up until our move to Scotland this year, my husband and I lived in Los Angeles. We were both born and raised in the City of Angels, spoiled by sunshine and a warm climate. However, our move to Scotland is a welcome one. We are enjoying the changing seasons, the myriad of golds and reds in autumn, and the frost-covered fields outside our house in the morning. Living on a farm with little light apart from our own cottage at night, the darkness begins to overwhelm our little home around 3:30 p. m. When I look outside the front windows late in the evening, I cannot see the hill in front of our house, nor the trees that line the top of it. It feels as if we are suspended in darkness. This is especially true on nights when the clouds cover the stars or the moon is new. Living in an old farmhouse, our small wood-burning stove in the living room becomes the center of our family life. When we arrive home after work and school, the sun has already set. One of us agrees to brave the cold and then scurries to the woodshed to gather kindling and sawdust bricks. We make the fire and tend to it throughout the night as we are watching the television, doing homework, or reading. 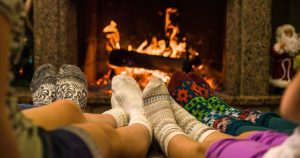 Having studied the historical-critical method in relation to the gospels, I know that the celebration of Christmas likely does not coincide with the actual date of Jesus’s birth. It is simply the time at which we celebrate his nativity as it came to replace popular pagan festivals such as Yule. I love Christmas. I love sharing the story of the nativity with my children, attending midnight Mass, and the spirit of giving that has come to define the Christmas season in our society. However, partially due to this knowledge, I have admittedly never felt particularly prayerful at this time of year.

Moving to Scotland and having to gather around the fire with my family each night has brought me new insight into the Advent season. I can imagine that one day, long ago, someone stared into the fire wherein a Yule log was burning. The flames were a literal preservation of life. Someone saw this and at the same time saw the infant Jesus, a sign of hope, a light in the darkness. That carries a new and deep significance for me which stirs my soul.

The first step of visio divina is listening. How many times have I read the beginning of Matthew’s gospel? Having taken my fair share of biblical studies courses, I know the generally accepted scholarly interpretation. The writer of Matthew was likely a Jewish man writing to a largely Jewish audience. He is demonstrating Jesus as the fulfillment of Scripture, as the shoot arising ‘from the stump of Jesse’ (Is. 11:1). [1] As I feel I have already noted this, I tend to skip over the first seventeen verses when reading the story of the nativity to my children during Advent. Rather than beginning with ‘An account of the genealogy of Jesus the Messiah, the son of David, the son of Abraham’, I usually begin with the meat of the story: ‘Now the birth of Jesus the Messiah took place in this way’ (Matt. 1:18).

Practicing the process of visio divina with The Saint John’s Bible makes such an overlooking of the first verses of Matthew impossible. Its startling reds and blues, geometrical lines, and flames of gold leaf are in fact a construction of Jesus’s genealogy. The menorah is Christ’s family tree. Jesus’s paternal ancestors are written at its roots, and Jesus is the culmination of an expansive history. As the central flame of the menorah, he is the light in the darkness, but not by himself. His flame is the product of a people, of a community, and of a faith tradition that make his light possible. Some of the names along the branches of the menorah are more familiar: David, Abraham, and Ruth. Others perhaps less so: Hezron, Zerubbabel, and Azor. However, all find their place in the family tree, constructed as the menorah itself. Without them, there is no light in the darkness. 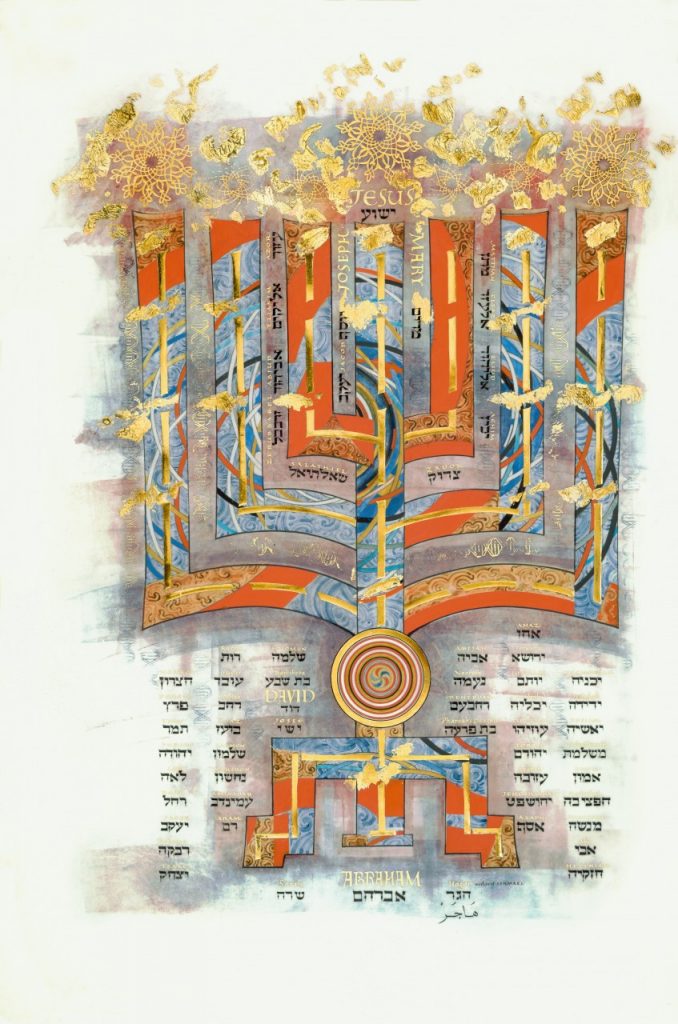 The practice of visio divina calls us to listen, see, and pray. What we can gloss over as printed words on a page demands to be seen in the illuminations. In reading Matthew 1:1-17, praying over the full-page illumination that accompanies it, and reading it once more, I meditated over two truths. Firstly, my Lord and Saviour is Jewish, thoroughly and completely. He was a Palestinian Jew with a rich heritage of which he made us spiritual inheritors. The gold strands of DNA helixes which hang between each branch of the menorah assert that Jesus was related to Jewish history not only by spirit but by blood. The radical kinship and hospitality that defined his ministry were a testament to his Jewish faith. How often, as Christians, do we forget this? How much blood has been spilt due to our lack of memory? Without Judaism we have no root and no place on which to stand. 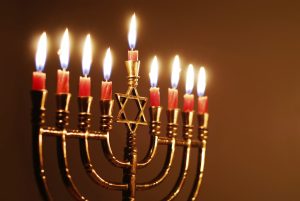 I am writing this piece on the last night of Chanukah. The Festival of Lights celebrates the rededication of the temple after the Maccabean Revolt wherein the persecution of the Jews by Antiochus Epiphanes was put to an end (1 Maccabees 4). There was only enough oil to provide light for one night, but, miraculously, the flames lasted for eight nights, allowing the celebration to continue. Both Chanukah and Christmas are festivals of joy resulting from a sign showing that, though we are in darkness, God has not abandoned us. We have been given a tangible sign in the physical world of God’s love for and solidarity with humanity. The abundant love of the divine provides a source for light when the fuel for our hope has seemingly run out. That the artist has placed the menorah, a symbol of Chanukah, alongside the introduction to the nativity is not an arbitrary choice. Christians and Jews alike are reminded of the warmth and hope of Yahweh in the midst of the cold shadows of winter.

Much of my love for The Saint John’s Bible is founded in its artists’ incorporation of science, interconnection, and female symbolism. A careful reading of Jesus’s genealogy in the first chapter of Matthew and a short look at the illumination beside it reveals that the artist incorporates names which have been disregarded by the gospel writer. Bathsheba, who is mentioned in Matthew only as ‘the wife of Uriah’, is here mentioned in her own right. The names of Sarah and Rebekah, overlooked in Matthew, are also marked. All the names are written in the manner familiar to most English speakers as well as in Hebrew calligraphy. The Hebrew writing is given bold prominence, again emphasising Jesus’s Jewish context. My favourite portion of this illumination, however, is at the bottom right of the menorah. There we find the name of Hagar listed in English, Hebrew, and Arabic. She who was used and cast away to die in the desert, whose son was stripped of his inheritance, is given her proper place along with the other matriarchs and patriarchs of the Abrahamic religions, reminding us that our faith is interconnected with both Judaism and Islam. 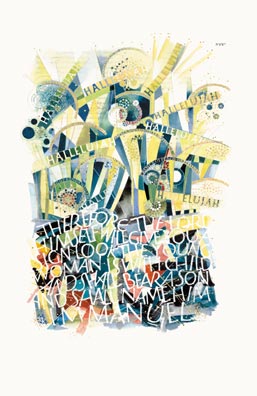 Just as Matthew 1:1-17 is a fulfilment of Isaiah 11:1, so too does a Christian interpretation of Isaiah foreshadow the birth of Jesus Christ. Thus, the illumination at the start of Matthew uses a Jewish symbol, the menorah, as a family tree, to hearken us back to Isaiah. In turn, the illumination accompanying Isaiah 11 highlights the words which prophesy Jesus’s birth, filling the page with blues and golds, prompting the image of the celestial choir of angels who sing to the shepherds in Luke 2:13. In this manner, The Saint John’s Bible demonstrates explicitly the cohesiveness of the Old and New Testaments whilst reinforcing our connection to our spiritual ancestors as well as to contemporary Judaism and Islam. The infant Jesus, the product of our mutual spiritual inheritance, is evidence of our interconnectedness, and thus our hope, our light in the darkness.

[1] All scriptural quotations are taken from the NRSV.