We are pleased to announce that Dave Reinhardt is the newest regular contributor on Transpositions.  Welcome to the team, Dave!

Are you the controller?  If the adverts are to be believed, purchasing the Kinect for Xbox 360 video game console will grant you this title and all the powers that go along with it.   Once the console is activated, simply sweeping your hand in front of it in just the right way will, among other things, make an avatar on the screen hit a table tennis ball with finesse.  Throw some sweet punches in the air and you may earn the title of virtual heavyweight champion of the world.  Last year the promise of becoming the controller resulted in sales figures so high the folks at Guinness Records awarded it the title ‘Fastest-Selling Gaming Peripheral’ in theUK.  Clearly Microsoft has hit upon a very clever and alluring concept, and they are not alone.

In the past few years, gesture-based technology has extended well beyond video games into a wide variety of personal computing devices.  Developers realize that controlling devices by way of gestures is often more simple and effective than other means.  The simplicity is borne out of familiarity.  As the Kinect advert says, ‘you don’t have to know anything you don’t already know, or do anything you don’t already do’.  The effectiveness of these devices is the result of brilliant programming—machines are made to read our movements and then translate them into meaningful commands. 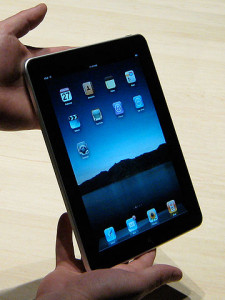 As cool as this might be, these machines are simply playing catch up to humans.   For instance, if we’re blathering on with a friend as we head into a library, all it takes is a quick look from a stern librarian with her index finger pressed up against her lips to instantly seal ours.  Conversely, we might find our heart melting, just a bit, as we say goodbye to a toddler who then spontaneously blows us a two-handed kiss.  Both of these encounters rely on gestures to powerfully convey meaning and both assume that we, like some of our machines, have the ability to understand the messages.  I find this ability to transmit and receive non-verbal, gestural messages fascinating, but is it more than that?

If we believe that humans are created in the image of God and, further, that God in Christ took on the flesh of humanity, it quickly becomes clear that gestures are not merely interesting, they are theologically significant.  If gestural communication is a mark of humanity then we can conclude that Jesus gestured.  The Son of God, in the flesh, gestured to his disciples, to people on the street, to his mother and his Father, and his gestures meant something.  Further, they (like the rest of his life) revealed something to people about the nature and character of God.

Yet none of these gestures would be understandable if removed from their context.  Pressing a finger against your lips can be either menacing (as in the example above) or full of mirth (as in, you-are-about-to-scare-a-friend-coming-around-the-corner-but-want-to–warn-another-friend-who-has-just-arrived-so-they-don’t-spoil-the-surprise).  Waving your arms around in front of a television screen looks utterly foolish if you don’t know about the game console.  Looking up to heaven to give thanks might just look like cloud gazing.  The meaning of our gestures hinges on context.

When we play gesture-based video games or swipe our fingers across the screen of a touch tablet, we do so with awareness and intentionality hoping to achieve certain results.  However, do we give the same consideration to gestures directed towards others?  Ought we?  Would we give more consideration to our gestures and other non-verbal actions if we thought they might, somehow, reveal something of our character to others?  If we call ourselves Christian, how aware are we of the correspondence between our context and the actions which mark our lives?  What if we hold to a theology that understands being a Christian as being united with Christ and that, as such, God is able to reveal himself through us?  Does such a thought excite or frighten?  Or, would you just rather wave the whole thing away?

Before making his way to St Andrews, Dave played the part of a peasant and a street sweep at a Renaissance Festival and Walt Disney World respectively. However, his interest in performance and communication were also put to use for over a decade as a corporate communications trainer in Charlotte, NC where he and his wife, Carrie, lived before moving overseas. Since then, they’ve welcomed their daughters Molly and Abigail into the world and Dave completed his M.Litt in Theology, Imagination, and the Arts at St Andrews. At the moment he’s busy researching the theological significance of embodied expression in pursuit of a PhD from St Andrews.

[EDITOR’S NOTE: Continuing our series on The Art of Lent: A Painting a Day from Ash Wednesday to Easterby Sister Wendy Beckett, Ewan Bowlby…