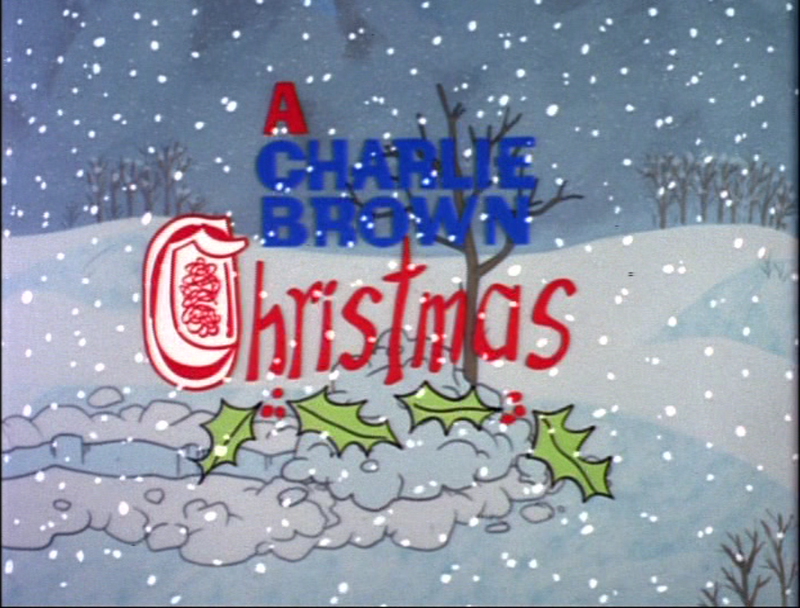 All the world is a stage and there is much revelry upon it.

As a remedy to Charlie Brown’s existential crisis about Christmas, he is invited to join in the Christmas revelry. Accompanied by Vince Guaraldi’s playful yet somewhat melancholy score, Bill Melendez transforms the Peanuts gang into sad self-absorbed characters from Truman Capote’s Breakfast at Tiffany’s. A marshmallow world of concupiscence. 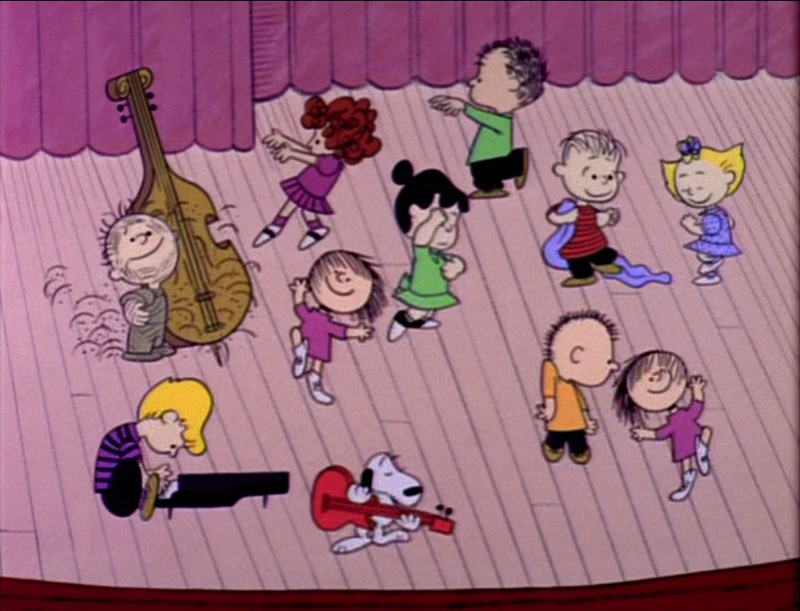 It is 1965. It is a world at play, drunk on victory, a high standard of living, material surplus, and free of the metaphysical obligations of the past that died in the ovens of Auschwitz. The modern world is in its death throws and the post-modern is about to be born in violence and turmoil. As Dietrich Bonhoeffer lamented, it is a world come of age. 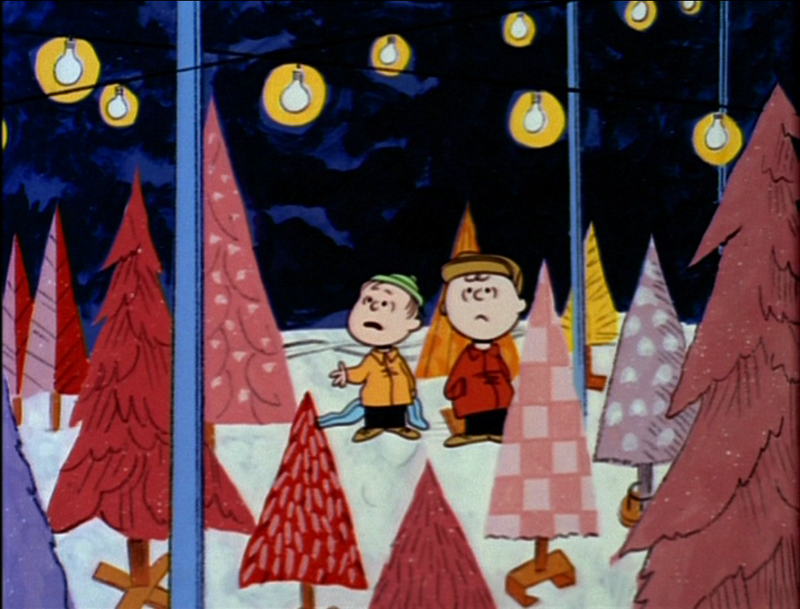 Charlie Brown tries desperately, without irony or sarcasm, to direct the Nativity play, but to no avail. His angst-ridden search for the true meaning of Christmas proves to be too square and incompatible with this hauntingly indifferent chorus. He is resolved to go on one last quest; Charlie Brown ventures into the heart of the labyrinth where the Minotaur awaits: go ye and bring back a Christmas tree.

“Gee, do they still make wooden Christmas trees?,” asks Linus. No truer and unsentimental cinematic image has ever been conceived in a Christmas movie than the frail little pine tree in the midst of pink, blue and red aluminum trees. It is the story of St. Boniface retold in an age of simulacrum and simulation. Nothing confirms this to me more than the current ironic use of Charlie Brown Christmas tree reproductions in many stores and homes across America. Happy hyperreality Christmas! 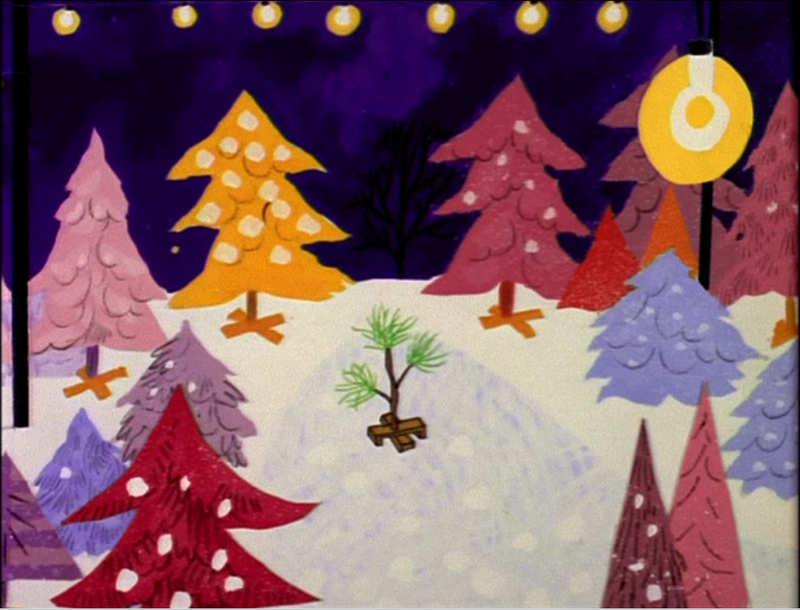 The Christmas tree, itself, emerged as a symbol of the eternal life of Christ in the home when St. Boniface chopped down the Oak of Thor and in its stead grew a fir. The baptism of pagan truth, narrative, and symbol into the Christian cosmology. “I don’t know Charlie Brown. Remember what Lucy said? This little tree doesn’t seem to fit the Modern spirit,” warns Linus. But in an age when all the gods have been murdered by sophisticated modern society, in the twilight of the idols where simulation rules, all that remains of hope is a dry and emaciated fir … its grace is a sufficient starting place.

Naturally, Charlie Brown and his tree are derided with a series of heart-breaking and humiliating long shots and irate close ups. “You were supposed to get a good tree! Can’t you even tell the difference between a good tree and a poor tree?,” Lucy berates. Charlie Brown is a fool but it is a foolishness (with a long tradition in the West) that undermines the logic of simulation. Jean Baudrillard called this kind of resistance Pataphysics…but its absurdist surface play misses the mark. Only the radical broadside of a god entering into human history, symbolized in the absurdity of this ‘poor’ tree, has the power to rupture the concatenation of signs in late-capitalism. A god of dung and straw (or conifer needles if you so prefer). 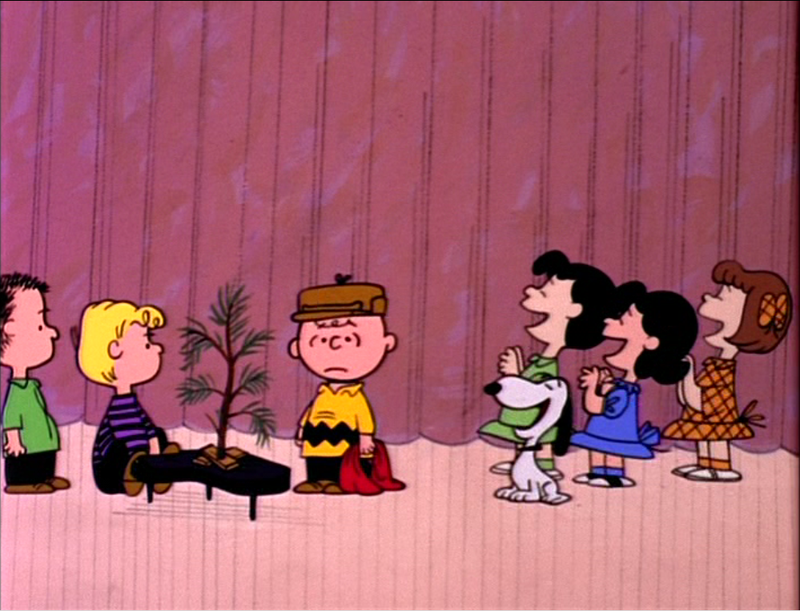 According to The Making of “A Charlie Brown Christmas”, Linus’ recitation of scripture, without irony or guile, was originally rejected by the studio. But Schulz, like Tolkien before him, realized, we are a people who experience grace through story. As J. R. R. Tolkien observed of ‘fairy-story’, of which the incarnation of a god in the form of a child in a dung strewn grotto is surely its most noble example, it re-enchants our world when done well.

Charlie Brown’s world is truly re-enchanted after hearing the Christmas story (not “the Word” as the Calvinist tradition would like to claim, but mythopoeia). It is a tale that transcends the modern desire for historical ‘verification’. It is a tale concerned with a ‘who’ not a ‘how’.

In a manner befitting Flanner O’Conner, Charlie Brown is now free to pay attention to the stars. “Linus is right. I won’t let all this commercialism ruin my Christmas. I’ll take this little tree home and decorate it. And I’ll show’em, it’ll really work in our play.” Read here, ‘it’ll really work in the marshmallow world of late-capitalism’. 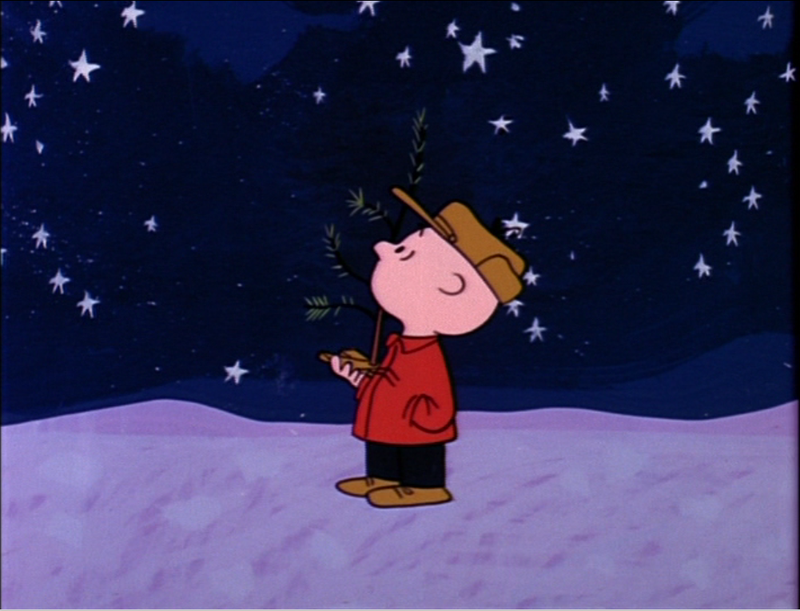 Of course, no Christmas movie is complete without a musical chorus. And Bill Melendez’s decision to cast children (most with no professional experience) in the voice roles is inspired. Their innocent, almost off-pitch, rendition of Charles Wesley’s Hark! the Herald Angels Sing is the sound of the Winter Solstice: the light of life rupturing the veil of darkness.

Reno Lauro received his PhD from the University of St. Andrews' Institute for Theology, Imagination, and the Arts and spent almost 2 years working for Terrence Malick on The Tree of Life and Voyage of Time. He currently teaches Cinema Studies in Scottsdale, Arizona where he lives with his wife Melissa and their son John Cassian. His book Synergy and Control: Life in the Age of the Screen (Fortress Press) will be out in early 2016.