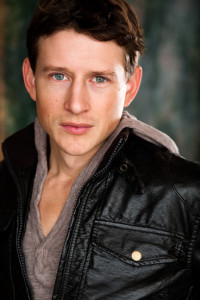 Lukas sits at his desk in front of a computer. He just received an audition for a popular crime drama. He is reading the sides, the scene pulled from the script for the audition, that his manager sent him twenty minutes ago. His manager is really happy to get this audition: it is a highly regarded show, there is an A-list director directing the episode, many star actors are leading the show, and it is airing on a great network. It shoots in New York and Lukas lives in Los Angeles. He would get to travel, which he loves to do. They are also offering scale and a half, which is about $15,000 for 8 days of work. He is happy to audition because it’s been a few weeks since his last audition. As he reads the sides, his face grows from smiling with excitement to sad and depressed.

The scene is about 28 yr old Tommy Schrader who is a pianist and painter, living in a loft in New York. His father passed away, and he is composing a song for his funeral. Lukas is moved by this start to the scene as he also loves playing the piano and painting. As the scene unfolds, Tommy gets angry, leaves his loft and goes walking on the streets.  We see the anger in Tommy’s eyes. He turns the corner and sees a girl in the alley talking on her phone. He overhears that she is talking to her dad. Suddenly he walks over to her, grabs her phone, breaks it and knocks her out. Then he rapes her. Leaving her knocked out, he walks back to his apartment and plays the piano.

The following scene involves an interrogation with a police officer, the lead of the show and a well known actor. The interrogation scene would be incredible to perform and in the end, Tommy breaks down, confesses and repents for his action.

Lukas sits there staring at the screen.

Initially, this seemed like a perfect fit. I have been waiting for an audition with an interrogation scene and through my acting, I want to tell stories about repentance. However, in order to do this, I would have to do a scene simulating the raping of a girl. Even though I know I am not really raping her, I have to create in my mind this intention and actually do these actions — see this girl, hear her scream, grab her, etc.

For years, I have been encouraged by other actors that acting is not real. Yet, I’m trained in my art to make it as real as possible in my mind. If I did a scene like this, I would go home after filming and remember it differently than the viewer or any of the other cast and crew. I don’t want to do it. I don’t want to spend time creating in my mind the passion to do that to someone. This goes against my reason for acting. I don’t think it would be pleasing to God.

I call my manager. I have to tell him thanks for his hard work getting this audition together but I am going to pass. ‘Would you please tell the casting director I would like to come in on another role someday?’ He asks why. I tell him my reasons. He reminds me the scene is not real and that I’ve passed on the last three auditions he’s set up for me. They were all great opportunities for my career and if I keep doing this, he may not be the best manager for me. Most actors would love to have this audition. I tell him that I’m sorry but I don’t want to perform this scene. We hang up.   I believe half the reason for this happening is to share my belief with my manager. I pray that I don’t lose my manager because he is really good. I pray for another audition.

The reason I act is to tell stories that uplift and encourage people in their lives and show the love of God, whether it be direct or indirect. I want to perform for audiences stories that are real and honest. While I know stories like the scene above happen, I don’t want to tell them at the cost of creating sinful, lustful thoughts for myself. It feels contradictory to me. I had the idea to pursue an acting career when I saw a play and experienced the power of its impact on me. I realized acting was an amazing way to convey a story, any story I wanted to tell to someone else. Part of my drive to act is the way it moves me to create characters, which develop the lessons and character in me. This is why I want to be careful what characters I create.

Lukas Behnken has worked extensively in film and television projects throughout the U.S. for nearly thirteen years. During that time Behnken has had the privilege of working on such television shows as Criminal Minds: Suspect Behavior, Saving Grace, Grey’s Anatomy, ER, Journeyman, Without A Trace, Everwood, and Dawson’s Creek to name only a few. Lukas began his film work acting in a few films for Porchlight Entertainment and has a long list of film titles available for rent. Lukas has a production company, SpiritLed Films, and also works with the homeless in LA County with his Non-Profit company, The Firsten, thefirsten.org He currently resides in Pasadena, Ca with his wife, actress Katherine Boecher.