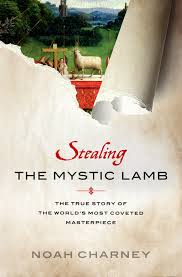 A Review of Noah Charney, Stealing the Mystic Lamb: The True Story of the World’s Most Coveted Masterpiece. New York, Public Affairs, 2010.

When I picked up this book, I wasn’t sure what to expect out of 288 pages on The Ghent Altarpiece. This masterpiece of European art history is at once an edifice of artistic technique, theology, and a window into European cultural heritage spanning from its creation (about 1426-32) to present day. There’s a bit of all of this in the book, though the intention of the author is clear: “This is the story of the most desired and victimized object of all time”(xiv). Charney’s book, then, is really about the history of the object itself, and given the almost unbelievable history of the painting (it’s been stolen, burned, looted in three different wars, copied, forged, smuggled, censored, hidden, and returned over and over again), it often reads more like a “who-done-it” mystery novel than an art book.

The reader is introduced to some of the most important cultural points about the painting in the initial chapter “The Mysteries of the Masterpiece”: theological themes, historical considerations, and political connotations of the subject matter. While I had hoped Charney would spend more time examining the theological and artistic significance of the work, the reader is simply introduced to these issues and then left to contemplate the exact reasons why the painting was the object of such desire over the course of the rest of the book.

Even so, the history of the painting’s comings and goings captures the reader’s imagination and lends a narrativity to the physical object on which we might hang those wider theological and philosophical questions. In what follows I want to point out a few of the most salient theological points and questions that were raised in my own reading of the book.

Charney points out that the painting draws on the history of the early church and its theological ideas by using many stories from The Golden Legend, references that the uneducated viewer would normally pass over. The artist, however, was not simply presenting a painted history, but also transformed those stories for his viewers in Ghent, Belgium. The painting remains forward-looking, drawing viewers into the heavenly Jerusalem that is pictured in the background of the Mystic Lamb panel. Yet as soon as one is drawn into that heavenly Jerusalem of St. John’s Revelation, they notice identifiable buildings from Belgium at the time—Utrecht Cathedral and St. Nicholas Church in Ghent—reminding both its original viewers and us again that the past, present, and future are evermore in relationship. Eventually, the painting suggests, the Sacrificial Lamb’s presence will be all-in-all. But here, heaven is already breaking into the earthly realm.

Another significant aspect of the Altarpiece is its capacity to communicate in its vision and form. As a medieval painting, the Ghent Altarpiece provides “an A to Z of Christian mystical theology, from the Annunciation (Luke 1:26-28) to the Adoration of the Mystic Lamb in the final book of the New Testament, Revelation”(10). As a Renaissance painting, it reveals the power of human creativity and genius to create such an intricate and in many ways, powerfully secretive, piece. For viewers who may have the privilege of seeing the altarpiece now, back at its home in St. Bavo Cathedral in Ghent, it communicates more generally the beauty of Christianity. One may sit and study its details for hours only to have new meanings and messages comes through.

Perhaps one of the biggest themes of this book was the underlying expression of how this piece serves as a symbol of cultural identity, not only for Belgium, but also for Western Christianity. The fact that it was stolen by the likes of Napoleon and Hitler attests to the fact that it serves as more than a beautiful piece of art. When thousands of pieces of art were saved by the “Monuments Men” in World War II, this painting was one of their primary concerns. This story, in particular, of the last time the world’s great masterpieces were in danger of total destruction is a moving example of the fact that identity is tied up with culture. Is it possible to destroy a person’s or nation’s identity by destroying its cultural objects? In many ways, this book answers yes.

It leads us to the conclusion that art is worth fighting for, whether in a time of war or in a contemporary church that often remains unhealthily iconoclastic.

Editors Note: In 2012 a high resolution centimeter-by-centimeter digitization project was unveiled allowing you to view every panel of the Altarpiece in detail. It can be viewed by clicking here.

Jenn Craft is an alumna of ITIA at University of St. Andrews and currently holds the post of Assistant Professor of Theology and Humanities at Point University in West Point, GA. She and her husband Brandon made a pilgrimage to visit The Ghent Altarpiece a summer ago and can attest to its indescribable beauty and mystery.