Editor’s Note: Transpositions is currently featuring a 5–part series on Daniel A. Siedell by Christopher R. Brewer. Part 1 – A Response to Siedell’s “Art and Culture, or Politics by Other Mean–Evangelical Style” was published 24 September and Part 2 – A Response to Siedell’s “Art and Explanation” on 17 October. Here, in Part 3, Brewer responds to Siedell’s God in the Gallery: A Christian Embrace of Art. Brewer will conclude his response with Part 4 – Of What Use Is Story? Further Reflections Upon a Storied Theology of the Arts (30 November) before Siedell’s final response on 10 December. 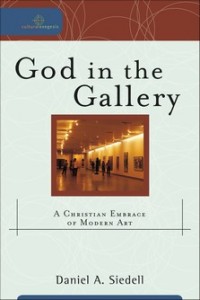 In God in the Gallery: A Christian Embrace of Modern Art,[1] Daniel A. Siedell argues that, as altars to the unknown God, modern and contemporary art point to God. He states:

Altars to the unknown god are strewn about the historical landscape of modern and contemporary art …. This book is the result of choosing the way of St. Paul: to take the cultural artifacts and to reveal and illuminate their insights into what they are only able to point to, not to name. But point they do, and they should be examined and celebrated as such.[2]

Initially, it might seem as though Siedell’s project might be an exploration in natural theology, and yet he explicitly and repeatedly distances himself from that designation.[3] This is not surprising given his Lutheran theology with its sharp distinction between law and grace, and yet he concedes art’s revelatory potential, even if unwittingly, on a number of occasions. He suggests, like Emil Brunner before him, that we can know something of our sinful state and need for grace by way of general revelation. He states: “Art is a witness to both our fallen world and hope for its redemption.”[4] Elsewhere, and in this same vein, he notes:

We need art to remind us that we are not okay. We don’t just need a boost, a change of scenery or a weekend getaway. We need to be killed so that we can be raised again. Art can and should at times kill us …. we must have art to confront us. For it is only then, when brought to the very end of ourselves, that we can receive grace.[5]

At several points this sounds very Barthian, as when Siedell emphatically states: “We need to be killed so that we can be raised again.”[6] And yet, the phrase that follows (i.e., “Art can and should at times kill us …”) is quintessentially un-Barthian. It is explicit there that for Siedell, it is art, and not God in Jesus Christ, that confronts and kills us. For Barth, these altars to the unknown god, and any attempt to name them, are “the most audacious form of idolatry.”[7] And so despite Siedell’s explicit claims to the contrary, his project could be read, and would have been read by Barth, as an exercise in natural theology (i.e., pragmatically if not confessionally).  At the very least, Siedell ought to be more cautious in quoting Barth (or Barth via George Hunsinger)[8] in support of his project.

There is much to like in Siedell’s God in the Gallery, but I wonder if his project might be clarified and strengthened via a different conversation partner. He might, on the one hand, pursue something along the lines of T.J. Goringe’s Earthly Visions,[9] but if he were to go this route (i.e., with Barth via Gorringe), I would suggest he (re)read sections from Barth’s Church Dogmatics IV/3.1 and the whole of Hunsinger’s Epilogue in How to Read Karl Barth in an effort to sharpen his theological language.[10]  If, on the other hand, Siedell could leave Barth and the law/grace dichotomy behind, he might pursue the broad sacramentality that he alludes to in “Art and Grace,” and this via the work of David Brown.[11] Brown is working against Barth, as well as English analytic philosophy of religion, “…both [of which] presuppose the disenchantment of the world.”[12]  Given Siedell’s language of “grace and art,” appropriation of Alexander Schmemann, “expansive notion of the church, its liturgy, and the Eucharist,” and his more recent contribution to Re-Enchantment, it would seem to be a preferable, and what’s more, theologically consistent, route.[13]