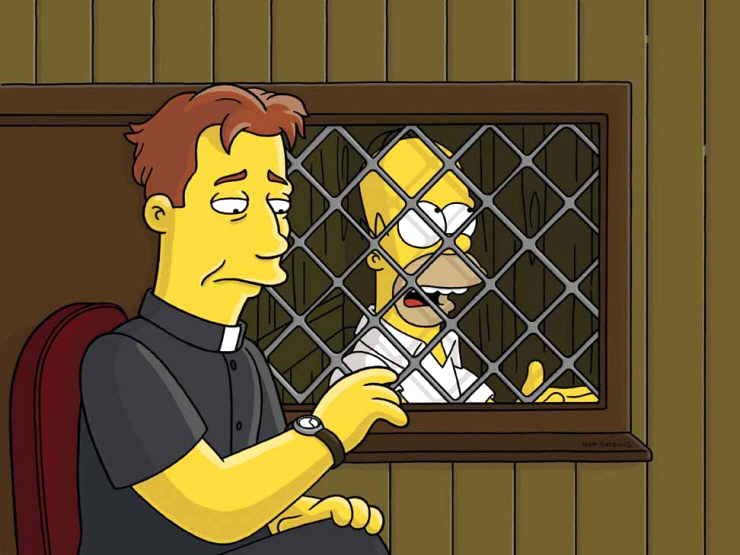 Shawn Bawulski is a PhD student in theology at the University of St Andrews. The Simpsons provides a diversion from his thesis on the doctrine of Hell.  He lives in St Andrews with Sara (wife), Kate (daughter), and Piper (a dog of superior intellect). This post provides complementary theological engagement with Shawn’s earlier post on The Simpsons.

The assumption at work in the world of The Simpsons is that truth in religious matters is so unattainable that the best one can hope for is pragmatism.  Interestingly, concepts invoked in the program like pluralism and exclusivism entail the existence of God and in most cases a need for reconciliation: the issue, or course, is how that reconciliation is accomplished.  The show accurately reflects the incurable religiosity of mankind and the pluralism that often springs from it, both of which stem from a striving and yearning of creatures whose needs cannot be filled by anything less than relationship with their Creator.  Against The Simpsons, I argue that the only solution to this predicament is the gospel, and the gospel is exclusive.

In John 14:6 Jesus says that he is the way, and the truth, and the life: no one comes to the Father except through him.  In Acts 4:12 Peter says that there is salvation in no one else other than Jesus, and “there is no other name under heaven given among men by which we must be saved.”  Contra the emphasis in The Simpsons on virtuous deeds over against the content of religious doctrine, the apostles preached the gospel to virtuous, moral, even God fearing Jews and gentiles, calling them for repentance and conversion.  Why would Peter need to preach the gospel to a virtuous man like Cornelius, and why would he convert and become baptized (Acts 10:34-43)?  If “right living” is the essence of religion, as The Simpsons assert, why not leave Cornelius be?

The Christian worldview is that religious truth—and indeed God himself—is accessible and knowable through divine revelation, the pinnacle of which is the person of Jesus Christ.  The Christian theologian, following the testimony of Scripture, must insist that the content of religious doctrine be primary; biblically, once one believes what is right and true, the right actions naturally follow.  The Simpsons is correct to put an emphasis on the fruit of religious belief but makes the invalid move of replacing belief with the fruit altogether.

A more general consideration: what does satire communicate?  What does it say about the worldview one should adopt, about truth and value?  The show does seem to have some genuine sentiments, especially regarding the importance of family, religion, and morality, but it is mostly satire.  A steady diet of satire can make the viewer cynical and prone to mockery.  Constant satire can lead to a depreciation of concern for truth and glibness about the significant matters in life.  If everything is a joke, nothing (except perhaps comedy itself) is to be taken seriously.  When a glimpse of seriousness pops through in the show, it is amplified by contrast to its surroundings but inevitably it is ultimately undercut (if not immediately, then in a later episode).

In the end, is The Simpsons take on religious pluralism redemptive?  Perhaps, but only somewhat.  What the show asserts on the topic of pluralism is ultimately false, and the Christian theologian must insist on this point.  Yet the pluralism of The Simpsons is different that of the broader culture: it causes in the viewer reflection on the issue and, to a degree, does not fall in line with the unqualified pluralism that prevails in much of the rest of entertainment.  From an American network television show with a large fan base and with mass appeal, such is quite possibly the best we could hope for.

Shawn Bawulski is a PhD student in theology at the University of St Andrews. The Simpsons provides a diversion from his thesis on the doctrine of Hell. He lives in St Andrews with Sara (wife), Kate (daughter), and Piper (a dog of superior intellect).

I spend most of my time reading and writing about Edith Nesbit. Most Brits remember her best for her novel, The Railway Children. The…