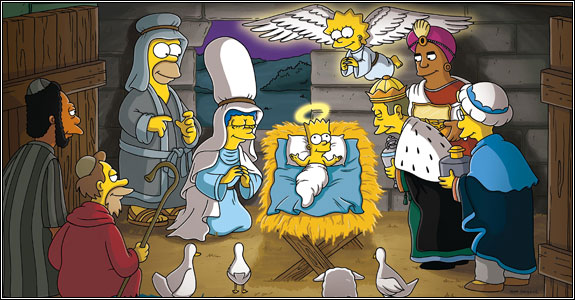 Shawn Bawulski is a PhD student in theology at the University of St Andrews. The Simpsons provides a diversion from his thesis on the doctrine of Hell.  He lives in St Andrews with Sara (wife), Kate (daughter), and Piper (a dog of superior intellect).

In this post I will briefly consider religious pluralism in The Simpsons, interpreting what the culturally iconic show has to say on the matter.

Despite being a cartoon, the show contains a surprising element of realism in the way it depicts the complexities of human life.  The best example of this uniqueness is the prominent role that religion plays on the show, very much unlike any other sitcom.  Religious content appears in nearly 70% of episodes and 11% have a main theme that is religious.  Of course, religion is treated like all other matters–with satire, irony, caricature and criticism, but also with great insight; never overly harsh but never leaving anyone unscathed.

In some ways it is hart do decipher exactly what The Simpsons asserts about any issue. much less religious ones.  This is perhaps attributable to the genre of the show and the nature of satiric, ironic comedy: the writers are often elusive in promoting a particular viewpoint because positions are put forth in order to be undercut for a comedic payoff.  However, as a fan drawing from a wealth of familiarity, in this short blog post I will do my best to distill down what The Simpsons have to say on religious pluralism.

The religious pluralism of The Simpsons is complexly qualified, focuses on the Christian tradition but treats other faiths as well, and essentially utilizes a pragmatic notion of “true religion.”  For The Simpsons it seems that the doctrinal content of religious belief is insignificant in comparison to what the writers consider to be “right” action associated with it.  The show feels no need to make the point that all faiths are the same–in fact the differences in religious faiths provide for much comedic mileage.

A key example is reverend Lovejoy’s words in “Homer the Heretic” when Ned, Apu, Krusty and other members of the volunteer firefighting force rescue Homer from his burning home (twice) and extinguish the flames:

Lovejoy: “But he was working in the hearts of your friends and neighbors when they went to your aid, be they Christian [Ned], Jew [Krusty], or miscellaneous [Apu].”

In addition to “Homer the Heretic”, which was a foundational episode for the show’s treatment of religion, the Christmas episode “Tis the Fifteenth Season” has a remarkable moment.  At the end of the episode, Ned Flanders reads from the second chapter of Luke, but is stopped by the mayor (“You can’t pray on city property!”).  In response, Homer says,

Let’s just say that on this day, a million years ago, a dude was born who most of us think was magic.  But others don’t–and that’s cool–but we’re probably right.  Amen.

This final sequence of the episode attacks not only the ignorance (“a million years ago”) and the functional paganism that is all too common in American Christianity (where practically Jesus is “magic”, non divine), but also recognizes the near-obligation of religious tolerance (“and that’s cool”) and asserts the reluctance that often broods under the surface of religious pluralism (“but we’re probably right”).

When one cuts through the layers of irony and satire, the religious pluralism on The Simpsons is essentially this: “true” religion is whatever leads people to do the “right” thing, what makes them good natured and virtuous.

In an upcoming blog post I will offer a theological engagement with religious pluralism in The Simpsons.